A team of researchers from the RIKEN Nishina Center for Accelerator-Based Science in Japan has demonstrated that the magic numbers 20 and 28 disappear from all neutron-rich magnesium isotopes, thereby establishing a new, larger area of nuclear deformation in the nuclear chart. 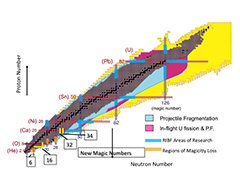 The Japanese study, published today in the prestigious journal Physical Review Letters, was made possible by the intense beam at the Radioactive Beam Factory (RIBF) at RIKEN, which produces the most intense radioactive isotope beams in the world.

Inside the atomic nucleus, protons and neutrons are organized in shell structures similar to the electron shell around an atom. When proton or neutron shells are filled with 2, 8, 20, 28, 50, 82, or 126 nucleons, these numbers are called “magic” and nuclei assume spherical shapes. In contrast, nuclei lose their spherical shape and become “deformed” when the number of nucleons is not a magic number.

Recent experimental data on neutron-rich, radioactive isotopes has challenged the assumption that magic numbers are the same for all nuclei. The neutron-rich isotope32Mg, which is composed of 12 protons and 20 neutrons, has been shown to be deformed by the disappearance of the neutron magic number 20, for example. In addition,42Si, with 14 protons and 28 neutrons, is also deformed.

The “Island of Deformation” is the region in the nuclear chart comprising elements known to lose their neutron magic number 20. This region was previously thought to be composed of only a few nuclei around32Mg. In the current study, the team led by Dr Pieter Doornenbal and Dr Hiroyoshi Sakurai, sought to understand whether the regions around32Mg and42Si are two isolated islands of deformation, or belong to the same, larger, connected area of deformation.

To carry out their experiment, the team accelerated a beam of stable48Ca up to 70% of the speed of light and projected it onto a beryllium target. The resulting radioactive39Al and40Si were selected and purified into beams that were shot at 60 % of the speed of light onto a carbon target. This second step produced neutron-rich, radioactive magnesium isotopes34,36,38Mg. By measuring the energy levels of the gamma rays emitted by the first excited states of these isotopes, the team could conclude that they all displayed a very deformed shape, and had lost their magic numbers 20 and 28.

“For the past two decades, the RIKEN Nishina Center has pioneered research on exotic nuclei in this region of the nuclear chart, and the disappearance of the neutron magic number 20. Thanks to the power of RIBF, we can now study many more neutron-rich nuclei. When we saw our results we were very surprised about the magnitude of the Island of Deformation,” explained Dr Doornenbal.

“Measuring the evolution of nuclear shells helps us understand the underlying forces inside the nucleus, that play also an important role in the creation of new chemical elements during supernovae,” added Dr Doornenbal. 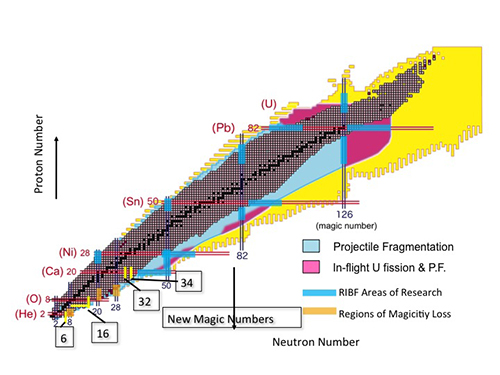 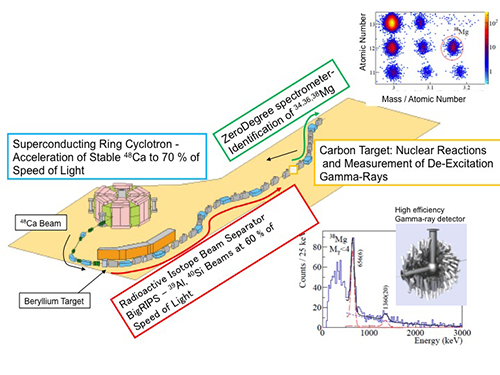