In a study published today in Nature Neuroscience, a group of researchers led by Takaomi Saido of the RIKEN Brain Science Institute in Japan have reported the creation of two new mouse models of Alzheimer’s disease that may potentially revolutionize research into this disease.

Alzheimer's disease, the primary cause of dementia in the elderly, imposes a tremendous social and economic burden on modern society. In Japan, the burden of the disease in 2050 is estimated to be a half a trillion US dollars, a figure equivalent to the government's annual revenues.

Unfortunately, it has proven very difficult to develop drugs capable of ameliorating the disease. After a tremendous burst of progress in the 1990s, the pace of discoveries has slowed. Dr. Saido believes that part of the difficulty is the inadequacy of current mouse models to replicate the real conditions of Alzheimer's disease and allow an understanding of the underlying mechanisms that lead to neurodegeneration. In fact, much of the research in Alzheimer's disease over the past decade may be flawed, as it was based on unrealistic models.

The problem with older mouse models is that they overexpress a protein called amyloid precursor protein, or APP, which gives rise to the amyloid-beta (Abeta) peptides that accumulate in the brain, eventually leading to the neurodegeneration that characterizes Alzheimer's disease. However, in mice the overexpression of APP gives rise to effects which are not seen in human Alzheimer's disease.

For example, the APP mutant mice often die of unknown causes at a young age, and the group believes this may be related to the generation of toxic fragments of APP, such as CTF-beta. In addition, some of the fragments of APP could be neuroprotective, making it difficult to judge whether drugs are being effective due to their effect on Abeta peptides, which are known to be involved in human AD, or whether it is due to other effects that would not be seen in human disease. In addition, the gene for expressing APP is inserted in different places in the genome, and may knock out other genes, creating artifacts that are not seen in humans.

With this awareness, more than a decade ago Dr. Saido launched a project to develop a new mouse model that would allow more accurate evaluation of therapies for the disease. One of the major hurdles involved a part of the gene, intron 16, which they discovered was necessary for creating more specific models.

The first mice model they developed (NL-F/NL-F) was knocked in with two mutations found in human familial Alzheimer's disease. The mice showed early accumulation of Abeta peptides, and importantly, were found to undergo cognitive dysfunction similar to the progression of AD seen in human patients. A second model, with the addition of a further mutation that had been discovered in a family in Sweden, showed even faster initiation of memory loss.

These new models could help in two major areas. The first model, which expresses high levels of the Abeta peptides, seems to realistically model the human form of AD, and could be used for elucidating the mechanism of Abeta deposition. The second model, which demonstrates AD pathology very early on, could be used to examine factors downstream of Abeta-40 and Abeta-42 deposition, such as tauopathy, which are believed to be involved in the neurodegeneration. These results may eventually contribute to drug development and to the discovery of new biomarkers for Alzheimer’s disease. The group is currently looking at several proteins, using the new models, which have potential to be biomarkers.

According to Dr. Saido, "We have a social responsibility to make Alzheimer's disease preventable and curable. The generation of appropriate mouse models will be a major breakthrough for understanding the mechanism of the disease, which will lead to the establishment of presymptomatic diagnosis, prevention and treatment of the disease." 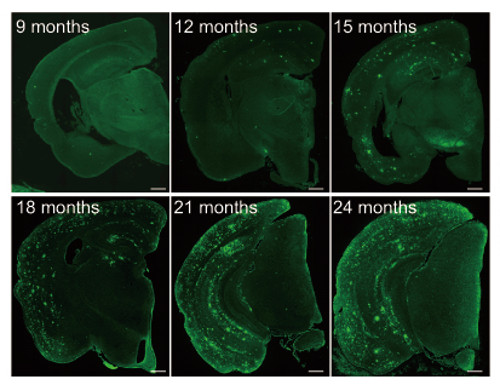 Brain sections from 9 to 24-month-old mice were immunostained with the anti- Abeta antibody, 4G8. Plaque areas were quantified as indicated in the right graph (n = 4, 5, 6, 6, 6, 4 and 6 mice/indicated time point, respectively). 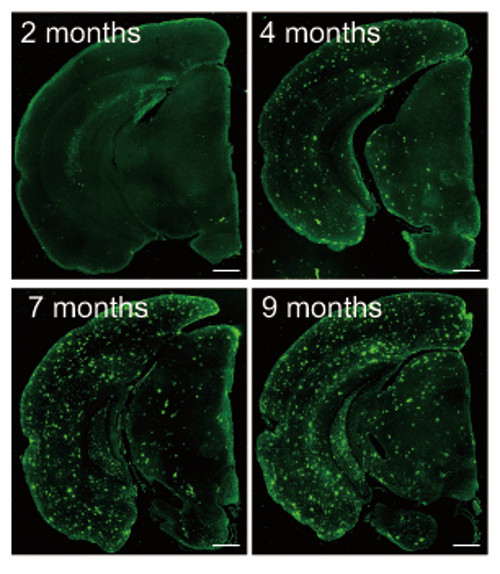