Using diverse methodologies, neuroscientists from the RIKEN Brain Science Institute report that defects in Fatty Acid Binding Proteins (FABPs) may help to explain the pathology in some cases of schizophrenia and autism spectrum disorders. After identifying mutations in FABPs from patients, the group led by Senior Team Leader Takeo Yoshikawa determined that the genetic disruption of Fabps in mice mimics disease behaviors seen in patients. This work suggests that disruption of FABPs could be a common link underlying some forms of these two prevalent mental disorders.

Published in the journal Human Molecular Genetics, the study reported that fatty acid binding proteins (FABPs), a component of lipid metabolism, are genetically linked to schizophrenia and autism spectrum disorder (ASD) in humans and dysfunctional behaviors in mice. The findings provide support for the involvement of lipid metabolism in the spectrum of cognitive disorders.

The brain is composed of lipids that provide structure and signaling functions, and disruption of lipid transport to or within the brain can lead to anomalous neurological symptoms. Previous studies revealed abnormally low levels of some polyunsaturated fatty acids (PUFAs) including essential fatty acids in schizophrenic and autistic patients but failed to identify the responsible proteins. Consequently, Yoshikawa and his team decided to investigate FABPs—molecules that facilitate the transport of PUFAs and other fatty acids. "Our prior study showed that disruption of Fabp7 in mice impaired neurogenesis, so we suspected that FABP7 and its family members had important roles in neurodevelopment", said Yoshikawa. The researchers focused on the major FABPs found in mature neurons and neuronal progenitors, FABP3, FABP5, and FABP7, to better understand their potential roles in mental disabilities.

The team found that the expression levels of FABPs in postmortem brain and blood cells of patients were altered. Using molecular analysis, the team identified specific mutations in FABP genes exclusively in patients, which caused an abnormal structure or function of these proteins, presumably preventing them from delivering the correct fatty acids to their target tissues and organelles inside cells.

To investigate the effect of Fabp loss in the brain, the researchers genetically inactivated the genes in mice and conducted behavioral tests. They found that mice lacking Fabps exhibited behaviors similar to those observed in human patients. Fabp3 knock-out mice showed a decrease in memory and social motivation, mirroring dysfunctional cognition and lack of interest in social communication in ASD patients. In contrast, Fabp7 knock-out mice displayed hyperactivity and anxiety, a phenotype similar to that observed in schizophrenic patients. "Although the amino acid sequence of the FABPs is similar, we think that they interact with different fatty acids and are expressed in different cells with distinct timing during development. This is likely the reason that the behaviors in the mice are different for each member of the Fabp family", said Yoshikawa.

Both schizophrenia and ASD are caused by many factors and conventional treatment does not work well on all patients. These findings suggest that FABPs may define one mechanism for these disorders selectively affecting lipid transport systems that may complement other etiological factors. "Identification of FABP mutations in humans may to help us take a personalized treatment approach," said Yoshikawa. "We hope our finding will lead to the development of tailor-made therapies, providing patients with molecules that complement deficiencies caused by their particular mutation." 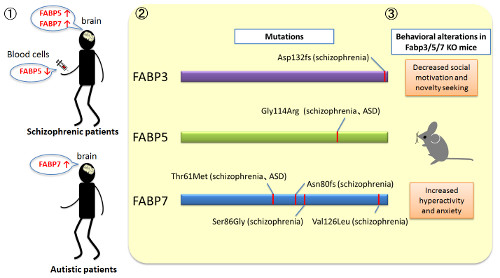 Schematic of experimental approach and results

Patient samples were analyzed and mutations in FABPs were identified. The effect of disrupting FABP genes was studied in mice. 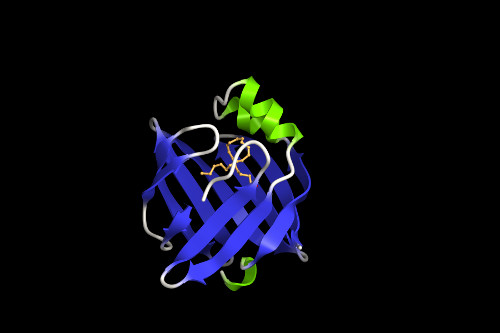