Degradation is key to the activity of the miR-21 oncomiR

Scientists from the RIKEN Center for Life Science Technologies in Japan have gained new clues that suggest the existence of a regulatory network that contributes to the irregular proliferation of cells in diseases such as cancers and psoriasis.

In recent years, the function of short strands of RNA called microRNAs has become a focus of intense research. MicroRNAs are small RNAs that regulate genes by selectively silencing their target messenger RNAs. They are often produced in variants that have some changes in sequence, but the function of these variations is often not well understood. In this research, the group looked at two variants of miR-21, a microRNA "oncomiR" known to target tumor suppressor genes and which is highly expressed in a number of cancers as well as other proliferative diseases such as psoriasis. It is very elevated in cancer compared to corresponding normal tissues, and contributes to cancer by inhibiting apoptosis and stimulating proliferation, angiogenesis, and metastasis.

In the research published in the Proceedings of the National Academy of Sciences (PNAS), the researchers presented evidence suggesting that a failure to degrade miR-21 contributes to its increase in diseases. They found that miR-21 is degraded in a process that involves PAPD5, an enzyme known to be a tumor suppressor. Based on an analysis of data from The Cancer Genome Atlas (TCGA), they concluded that this process is disrupted in many cancers, adding to the irregular accumulation of miR-21 seen in those diseases.

"We were very surprised," said Michiel de Hoon, who led the study, "at how general these results were. We saw the same processing pathway in a wide variety of diseases, with the same patterns of disruption of the pathway." 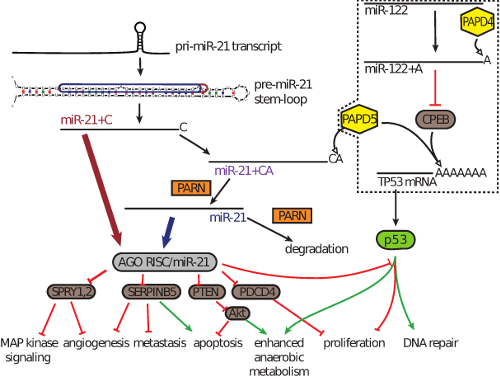 PAPD5 adds a nucleotide to miR-21, thereby stimulating degradation of this oncogenic microRNA by the nuclease PARN. Previously, PAPD5 was shown to also be involved in the maintenance of tumor suppressor protein p53, as shown on the right. 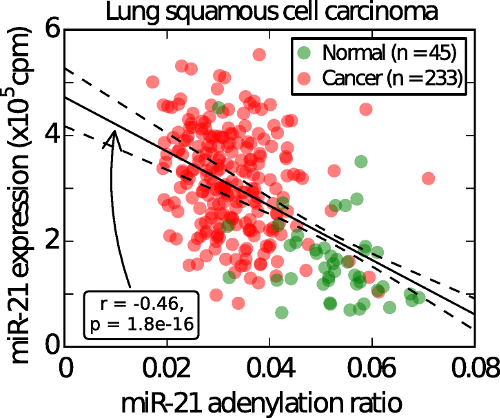 It was found that the degradation path of this oncogenic microRNA is disrupted in many types of cancers. This figure shows data from lung squamous cell carcinoma as an example.