Aromatic compounds are found widely in natural resources such as petroleum and biomass, and breaking the carbon-carbon bonds in these compounds plays an important role in the production of fuels and valuable chemicals from natural resources. However, aromatic carbon-carbon bonds are very stable and difficult to break. In the chemical industry, the cleavage of these bonds requires the use of solid catalysts at high temperatures, usually giving rise to a mixture of products, and the mechanisms are still poorly understood.

Now, in research published in Nature, Zhaomin Hou and colleagues from the RIKEN Center for Sustainable Resource Science in Japan have demonstrated a way to use a metallic complex, trinuclear titanium hydride, to accomplish the task of activating benzene by breaking the aromatic carbon-carbon bonds at relatively mild temperatures and in a highly selective way.

This paper reports the first example of carbon-carbon bond cleavage and rearrangement of benzene by a well-defined molecular system. It not only offers unprecedented mechanistic details on the hydrocracking of the benzene ring, an important industrial process of petroleum refining, but also demonstrates for the first time that molecular multimetallic hydrides can serve as a unique platform for breaking inactive aromatic molecules.

The authors previously demonstrated, from a serendipitous finding, that multimetallic hydride clusters can serve as a platform for the activation of dinitrogen through cooperation of the multiple metal hydride sites, which could contribute to easier production of ammonia fertilizers. At that time, they envisioned that these synergistic effects might also be used for the activation of other inactive chemical bonds such as C-H and C-C bonds. This led to the current discovery.

Zhaomin Hou, who led the research, says, "This work deepens our understanding of carbon-carbon bond cleavage. We were able to achieve the cleavage of benzene at room temperature with a multimetallic polyhydride compound, thanks to the synergistic effects of the multiple metal hydride active sites, offering information on the reaction mechanism at the molecular level. This could help us to design new catalysts for more efficient and selective production of useful materials from natural resources." 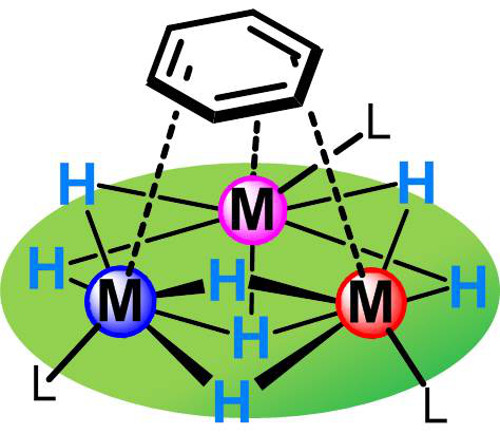 Figure showing how the individual metallic elements in the molecular multimetallic hydride break the carbon-carbon bonds in the benzene ring. 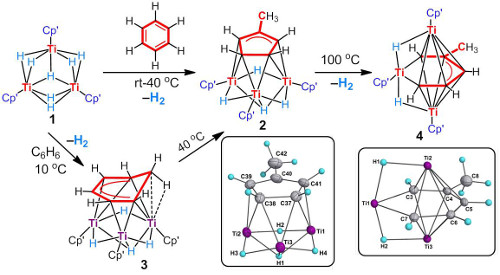