For legume plants, a new route from shoot to root

A new study shows that legume plants regulate their symbiotic relationship with soil bacteria by using cytokinins—signaling molecules—that are transmitted through the plant structure from leaves into the roots to control the number of bacteria-holding nodules in the roots. This collaborative study was conducted by researchers from the National Institute for Basic Biology, the Graduate University for Advanced Studies (SOKENDAI), and the RIKEN Center for Sustainable Resource Science in Japan.

Legumes, an important plant family which includes lentils, soybeans, and peanuts, have the ability to prosper in nitrogen-poor soil environments thanks to an ingenious adaptation: they develop a symbiotic relationship with nitrogen-fixing bacteria called rhizobia, allowing the bacteria to infect them within special structures known as nodules that are located along their roots. However, it takes energy to produce and maintain these nodules, hurting the ability of the plant to grow, so legumes also have means to reduce their number when they are not necessary.

Interestingly, it has been known for some time that the regulation of these nodules is done in the shoots of the plants, above ground, and that somehow the leaves transmit the information to the roots, using an unknown chemical mechanism, to signal that the plant should develop or get rid of root nodules. The upward signal from root to shoot is known to be done by peptides called CLE-RS1 and CLE-RS2, but the identity of the molecule doing the signaling downward has remained veiled in mystery.

In this research, published in Nature Communications, the group demonstrates using the model legume Lotus japonicus that the downward signaling is actually performed by a cytokinin—though the exact molecule remains to be identified—which is passed into the roots through a network of tissues called the phloem. Cytokinins are important plant hormones known to regulate many aspects of plant growth and development, and now a new function—root nodule regulation—has been added to their repertoire.

The plants perform the regulation in a complex way. The plants grow the nodules, providing a place for the rhizobia to prosper. Then, rhizobial infection of the roots triggers the production of certain peptides in the roots, and the perception of this signal by the receptor kinase HAR1 in shoots, it is presumed, induces the production of an unidentified shoot-derived inhibitor that translocates to the roots and blocks further nodule development. The researchers show that a signaling pathway called CLE-RS1/2-HAR1 activates the production of shoot-derived cytokinins which have the capacity to systemically suppress the nodulation.

This study, together with previous research results, clearly shows that cytokinins are key signaling molecules in organ-to-organ communication, allowing balanced plant growth and development, and opens the road to identifying the exact cytokinin involved in downward signaling in the Lotus japonicus.

According to Hitoshi Sakakibara, who led the RIKEN group participating in the project, "cytokinin has been implicated in shoot-to-root long distance signaling for many years. However, no convincing results were obtained from studies using Arabidopsis, the best known model plant. Now, our study with Lotus japonicus has given us the first convincing evidence of a shoot-to-root signal function of cytokinin." 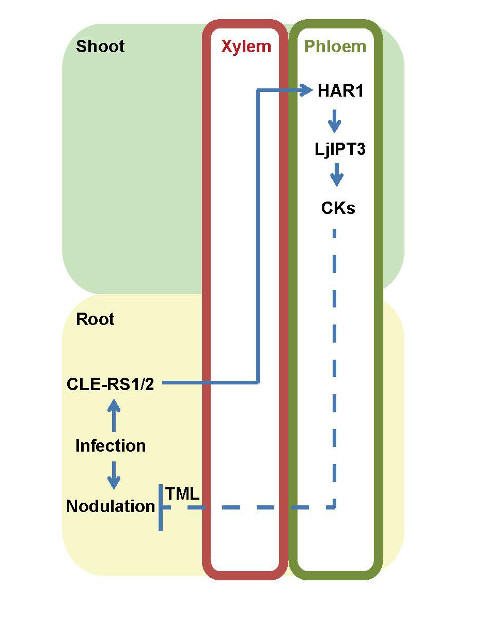 Demonstrated and putative regulatory relationships are indicated by bold and dotted lines, respectively. 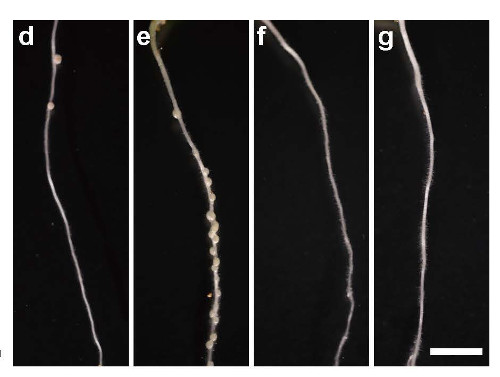 The nodules are shown for GUSox controls (d), har1-7 mutants, which overexpress HAR1 (e), plants overexpressing CLE-RS1 (f) and CLE-RS2 (g), which indicate the presence of nodules, beginning the signal cascade the stops nodule production. The bar in (g) is 5 mm.