Mathematical model shows how the brain remains stable during learning

Complex biochemical signals that coordinate fast and slow changes in neuronal networks keep the brain in balance during learning, according to an international team of scientists from the RIKEN Brain Science Institute in Japan, UC San Francisco (UCSF), and Columbia University in New York.

The work, reported on October 22 in the journal Neuron, culminates a six-year quest by a collaborative team from the three institutions to solve a decades-old question and opens the door to a more general understanding of how the brain learns and consolidates new experiences on dramatically different timescales.

Neuronal networks form a learning machine that allows the brain to extract and store new information from its surroundings via the senses. Researchers have long puzzled over how the brain achieves sensitivity and stability to unexpected new experiences during learning—two seemingly contradictory requirements.

A new model devised by this team of mathematicians and brain scientists shows how the brain's network can learn new information while maintaining stability.

To address the problem, the team turned to a classic experimental system. After birth, the visual area of the brain's cortex undergoes rapid modification to match the properties of neurons when seeing the world through the left and right eyes, a phenomenon termed "ocular dominance plasticity," or ODP. The discovery of this dramatic plasticity was recognized by the 1981 Nobel Prize in Physiology or Medicine awarded to David H. Hubel and Torsten N. Wiesel.

ODP learning contains a paradox that puzzled researchers—it relies on fast-acting changes in activity called "Hebbian plasticity" in which neural connections strengthen or weaken almost instantly depending on their frequency of use. However, acting alone, this process could lead to unstable activity levels.

In 2008, the UCSF team of Megumi Kaneko and Michael P. Stryker found that a second process, termed "homeostatic plasticity," also controls ODP by tuning the activity of the whole neural network up in a slower manner, resembling the system for controlling the overall brightness of a TV screen without changing its images.

By modeling Hebbian and homeostatic plasticity together, mathematicians Taro Toyoizumi and Ken Miller of Columbia saw a possible resolution to the paradox of brain stability during learning. Dr. Toyoizumi, who is now at the RIKEN Brain Science Institute in Japan, explains, "We were running simulations of ODP using a conventional model. When we failed to reconcile Kaneko and Stryker's data to the model, we had to develop a new theoretical solution."

"It seemed important to explore the interactions between these two different types of plasticity to understand the computations performed by neurons in the visual area," Dr. Stryker adds. Testing the new mathematical model in an animal during experimental ODP was necessary, so the teams decided to collaborate.

The theory and experimental findings showed that fast Hebbian and slow homeostatic plasticity work together during learning, but only after each has independently assured stability on its own timescale. "The essential idea is that the fast and slow processes control separate biochemical factors," said Dr. Miller.

"Our model solves the ODP paradox and may explain in general terms how learning occurs in other areas of the brain," said Dr. Toyoizumi. "Building on our general mathematical model for learning could reveal insights into new principles of brain capacities and diseases." 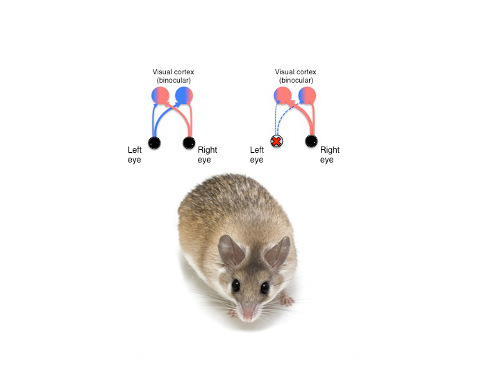 When one eye is incapable of vision for an extended time, the connections from that eye to the visual cortex become weakened while those from the other eye are strengthened.