Images of a nearly invisible mouse

Researchers at the RIKEN Quantitative Biology Center in Japan, together with collaborators from the University of Tokyo, have developed a method that combines tissue decolorization and light-sheet fluorescent microscopy to take extremely detailed images of the interior of individual organs and even entire organisms. The work, published in Cell, opens new possibilities for understanding the way life works—the ultimate dream of systems biology—by allowing scientists to make tissues and whole organisms transparent and then image them at extremely precise, single-cell resolution.

To achieve this feat, the researchers, led by Hiroki Ueda, began with a method called CUBIC (Clear, Unobstructed Brain Imaging Cocktails and Computational Analysis), which they had previously used to image whole brains. Though brain tissue is lipid-rich, and thus susceptible to many clearance methods, other parts of the body contain many molecular subunits known as chromophores, which absorb light. One chromophore, heme, which forms part of hemoglobin, is present in most tissues of the body and blocks light. The group decided to focus on this issue and discovered, in a surprise finding, that the aminoalcohols included in the CUBIC reagent could elute the heme from the hemoglobin and by doing so make other organs dramatically more transparent.

Using the method, they took images of mouse brains, hearts, lungs, kidneys, and livers, and then went on to attempt the method on infant and adult mice, and found that in all cases they could get clear tissues. They used the technique of light-sheet fluorescent microscopy, which involves taking "slices" of tissues without having to actually cut into it, to gain 3D images of the organs. To test the practicability of the method, they examined the pancreases of diabetic and non-diabetic mice, and found clear differences in the isles of Langerhans, the structures in the pancreas that produce insulin.

Although these methods could not be used in living organisms, since they require the tissues to be fixed using reagents, they could, according to Kazuki Tainaka, the first author of the paper, be very useful for gaining new understanding of the 3D structure of organs and how certain genes are expressed in various tissues. He said, "We were very surprised that the entire body of infant and adult mice could be made nearly transparent by a direct transcardial CUBIC perfusion coupled with a two-week clearing protocol. It allowed us to see cellular networks inside tissues, which is one of the fundamental challenges in biology and medicine."

According to Hiroki Ueda, who led the research team, "This new method could be used for 3D pathology, anatomical studies, and immunohistochemistry of entire organisms. For example, it could be used to study how embryos develop or how cancer and autoimmune diseases develop at the cellular level, leading to a deeper understanding of such diseases and perhaps to new therapeutic strategies. It could lead to the achievement of one of our great dreams, organism-level systems biology based on whole-body imaging at single-cell resolution."

Though it is an important finding, more work lies ahead. In the future, the group plans to make improvements to the microscopy method to allow for the rapid imaging of whole bodies of adult mice or larger samples such as human brains, and to apply this technology to further our understanding of autoimmune and psychiatric diseases. 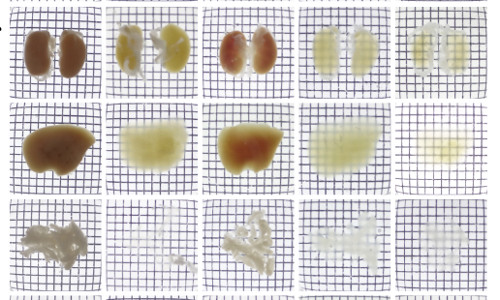 Mouse kidneys, liver, and pancreas imaged after treatment with a variety of protocols: a saline solution, Scale, SeeDB, CUBIC, and CB-Perfusion (which was used in this study).

Using the protocol for immunostaining

Epithelial cells in the lung are visualized (highest resolution on the right) by immunostaining with the antibody to pan-cytokeratin.