A new angle on infertility

Scientists from the RIKEN BioResource Center in Tsukuba, Japan, have discovered that a single mutation in the beta-catenin gene, which codes a protein known to be deeply involved in a number of developmental and homeostatic processes, can lead to infertility not through a disruption of the production of egg or sperm cells, but rather by leading to abnormalities in the morphology of the sexual organs, making natural reproduction impossible.

Beta-catenin is an essential protein in the Wnt/beta-catenin signaling pathway, which has been shown in mice to be involved in the development and maintenance of most, if not all organs, throughout their lives. Normally, it is switched on at some points during development, but then is turned off when it is no longer appropriate. The BRC research group, in a study published in Scientific Reports, developed a mouse with single mutation to the beta-catenin gene, with the goal to discover so far unrevealed functions of beta-catenin, a protein that is well conserved through evolution. They created mice with single changes in amino acids, and from testing, found a strain where the mice were not able to produce offspring through natural mating, but were able to do so through in vitro fertilization, showing that the problem was caused by a structural problem rather than a problem with the eggs or sperm. They found that in these mice, the pathway did not shut off properly only in certain tissues, leading to malformations of the sexual organs—seminal vesicles in males and vaginas in females—that prevented them from successfully reproducing.

This research could help to deepen our understanding of infertility—a problem that troubles almost one in ten couples today hoping to have a baby. The research has also elucidated a new function for the Wnt/beta-catenin pathway, which plays a role in regulating cell growth as well as cell-cell communication.

Takuya Murata of RIKEN BRC, the first author of the paper, says, "Because the amino acid sequence of beta-catenin is 100% identical in humans and mice, the nucleotide change we saw could cause the same mutation in humans. This raises the possibility that some infertility could be caused by B-catenin, which has not generally been considered as a potential cause so far. This finding came as a major surprise because we were expecting to see effects on many organs, since the Wnt/beta-catenin pathway is so ubiquitous. But instead we found that the effects of this change were limited to specific organs."

According to Yoichi Gondo, who led the research group, "If based on these results, we can confirm a link between infertility and this gene, this could lead to a path for the early detection and treatment based on the genetic diagnosis of the infertility." 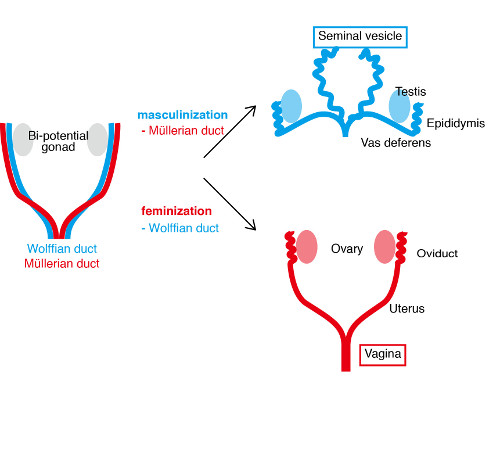 Normal development of the seminal vesicle and vagina 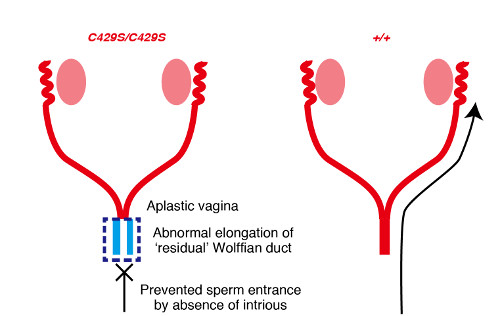