Out of danger: a neural basis for avoiding threats

Researchers at the RIKEN Brain Science Institute in Japan have identified a key neuronal pathway that makes learning to avoid unpleasant situations possible. Published online in the November 20 issue of Neuron, the work shows that avoidance learning requires neural activity in the habenula representing changes in future expectations.

Learning to avoid threats is an essential survival skill for both humans and animals. To do so, animals must be able to predict a danger and then update their predictions based on their actions and new outcomes. Until now, the neural mechanisms underlying this process have been a mystery. However, in a series of ingenious experiments, a research team led by Hitoshi Okamoto of BSI have identified a brain area called the habenula as a region that makes avoidance-learning possible by outputting negative expectation signals to downstream serotonergic neurons in the brain-stem raphe nucleus.

To accomplish this, they first created a model system in which zebrafish learned to associate a red light with an electric shock in a test chamber, and then subsequently learned to escape the chamber before the shock occurred. They found that when fish saw the red light indicating a potential threat of shock, activity in habenular neurons increased, signifying their expectations of an unpleasant experience, and then decreased as fish learned to avoid the threat. This pattern exactly matches what is required for a brain region that represents changing aversive expectation value.

To investigate whether this information is necessary for avoidance learning, the team created several transgenic fish lines that allowed them to artificially activate or silence only habenular neurons that also project to serotonergic neurons of the raphe nucleus.

Using optogenetics, they showed that activating this pathway can mimic an adverse event and lead to avoidance learning. In one fish line, they inserted a gene encoding the light-activated ion channel Channelrhodopsin-2 into habenular neurons, which could then be activated when exposed to blue light via a fiber optic cable implanted in their brain. Remarkably, shining blue light onto these neurons each time fish swam to one side of the tank caused them to eventually avoid that side of the tank despite the absence of any real threat.

Next, to determine whether silencing the pathway prevents avoidance learning, they created another transgenic fish line in which habenula neurons could not communicate with the raphe. Not only did these fish fail to learn how to avoid places where they could be shocked, they seemed to persist in exhibiting a panic-like response to the red light.

The behaviors observed in this study are similar to what happens in human panic and anxiety disorders, in which the loss of appropriate expectation can lead to panic, or overly negative expectations (anxiety) can lead to avoidance of places or situations. Noting that patients with this disorder are often prescribed drugs that increase serotonin function, lead author Ryunosuke Amo speculates that, "their symptoms might be related to dysfunction of the habenulo-raphe pathway."

Investigating evolutionally conserved behavior in vertebrates should lead to an understanding of neural mechanisms that regulate behavior. As Dr. Okamoto explains, "studying how the threat-expectation signals are transferred and utilized for behavioral learning could lead the way to better treatments for anxiety and panic disorders."

Projection from the ventral habenula to the median raphe 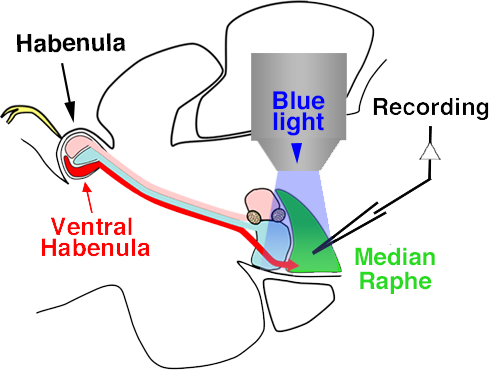 Schematic of the in vitro stimulation and recording process

Habenular neurons containing the light-activated ion channel Channelrhodopsin-2 project to the median raphe (red line). Serotonergic neurons in the median raphe (green; expressing GFP) are recorded as blue light is applied to incoming axons. Recorded activity increased when the blue light was applied, showing that these neurons receive input from the ventral habenula. 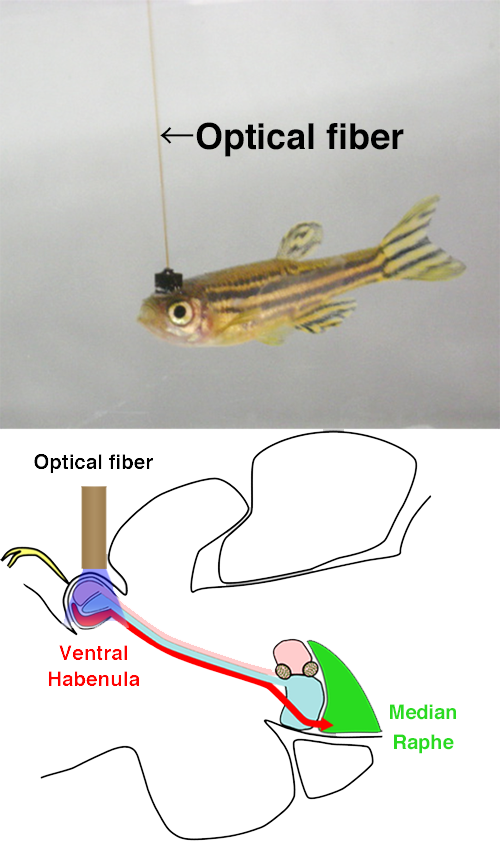 (Top) Photograph of a live zebra fish with an optical fiber embedded in its brain. (Bottom) Schematic. Blue light is used to stimulate habenular neurons containing the light-activated ion channel Channelrhodopsin-2. This stimulation was enough to induce aversion to otherwise non-threatening objects, and fish then learned how to avoid the (fake) danger.