While vitamin C in plant chloroplasts is known to help prevent a reduction in growth that plants experience when exposed to excessive light—phenomenon called photo inhibition—how it gets into chloroplasts to begin with has been a mystery. Now, a team of researchers from the RIKEN Center for Sustainable Resources and Okayama University has identified PHT4;4 as the transport protein that allows vitamin C to enter chloroplasts. Published in Nature Communications, the work shows that PHT4;4 can transport vitamin C and that it is located in the envelope membranes of chloroplasts. The researchers found that removing it leads to both less vitamin C in chloroplasts and increased photoinhibition triggered by extreme light. The research could lead to the development of crop plants with higher tolerances to environmental stress and reduce the damage to farmland in regions with strong light.

While we need vitamin C to stay healthy, plants actually make it for their own benefit. Produced in mitochondria in reaction to stress, vitamin C enters other cell organs such as chloroplasts where it is needed as an antioxidant and coenzyme in metabolic reactions that help protect the plant.

In a series of experiments using the mustard green Arabidopsis thaliana, a common model plant, the researchers tested their hypothesis that a member of the PHT4 family of proteins was responsible for transporting vitamin C—also known as ascorbic acid—into chloroplasts. First, they incorporated each of the four PHT4 proteins into artificial membranes—proteoliposomes—and simulated the natural negative membrane potential. They found that vitamin C only crossed the membranes containing PHT4;4, indicating that this family member was likely the transporter they were looking for.

Next, they determined where exactly PHT4;4 is naturally located inside the plants. After quantitative PCR showed that it is located mostly in leaves but not in roots, immunofluorescence microscopy revealed that within the plant's cells, it is located in the envelope membrane surrounding the chloroplasts, but not within the inner thylakoid membranes.

While the function and location of PHT4;4 identified it as the most likely transporter, looking at plants in which it had been genetically knocked out made the case even stronger. Researchers compared the amount of reduced and oxidized vitamin C between normal and mutant plants. Under high-light conditions, more reduced vitamin C is found in normal plant chloroplasts than under low-light conditions. While this was also true in the mutants, the amount was about 35% less than in the normal plants, which matched the decrease in the reduced form of vitamin C found in the leaves of the mutant plants.

One way that plants protect themselves from excess light is to convert it to heat and let it dissipate through a series of reactions called the xanthophyll cycle that occurs inside chloroplasts. Vitamin C is a crucial coenzyme in this cycle, and analysis showed that the mutant plants could not dissipate as much of the excessive light energy as normal plants could.

According to lead author Takaaki Miyaji of Okayama University "I believe that this research could lead to innovations that target PHT4;4 in order to create crop plants that can more efficiently transport vitamin C into the chloroplast." Added Takahashi Kuromori of RIKEN "these plants would then have better than normal photoprotective properties and could prevent reduced growth in farmland that suffers from high light exposure." 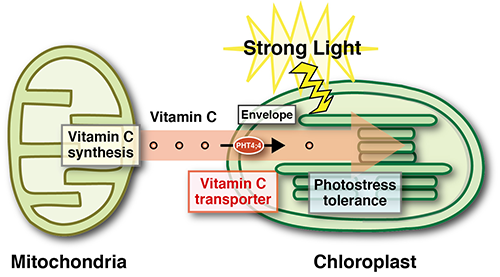 Under photostress (strong light), vitamin C is released from plant mitochondria and enters the chloroplast with the help of PHT4;4, where it can then take part in the xanthophyll cycle to release excess energy as heat. 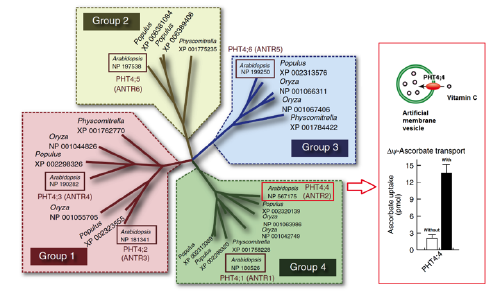 (Left) Phylogenetic tree of the plant PHT4 transporter family. AtPHT4;4 is in the green box. (Right) Vitamin C uptake by the artificial membrane with and without AtPHT4;4. 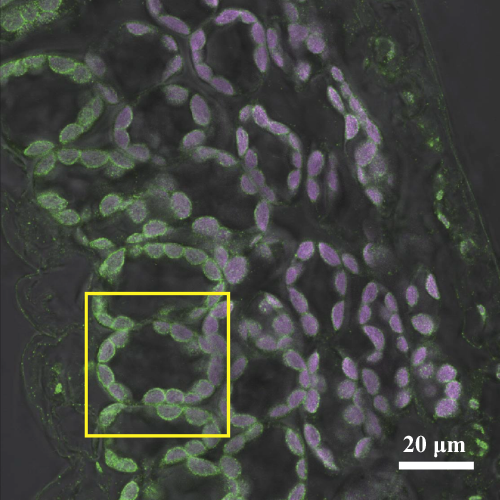 Transporter AtPHT4;4 detected mostly in the envelope membranes of chloroplasts in Arabidopsis leaves. 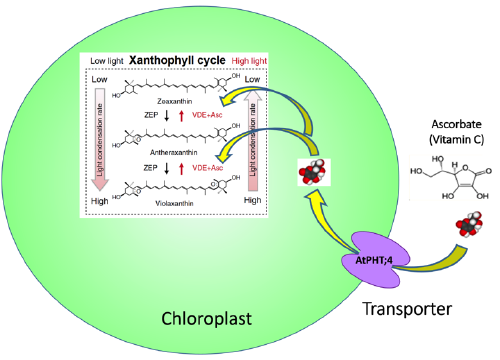 Vitamin C acts as a coenzyme in the xanthophyll cycle that converts excess energy into heat.