Scientists at the RIKEN Center for Life Science Technologies, along with researchers from the AIST Human Technology Research Institute in Japan, have identified a time-dependent interplay between two brain regions that contributes to the recovery of motor function after focal brain damage, such as a stroke. Published in the Journal of Neuroscience, the research shows that when motor functions are remapped through rehabilitative training, brain regions relatively distant from a lesion are recruited during the initial stages and functional connections with regions near the lesion are strengthened during the latter stages.

The research team investigated the special kind of neural plasticity that allows the recovery of motor function after brain damage, focusing on changes that occur during the course of rehabilitative training. This kind of training is known to promote structural and functional alterations in the brain that improve impaired motor ability, but how it does so is a question that neuroscientists are still trying to answer.

The team studied the rehabilitation process in monkeys that had suffered injury to the region of the cerebral cortex that controls hand movements. This region of the primary motor cortex is especially needed for fine movements, such as those required to grip and manipulate small objects using fingers. To facilitate recovery of motor function, the researchers taught monkeys to quickly and repeatedly grab a piece of potato through a small opening using their thumbs and index fingers—a task that requires a high degree of manual dexterity.

As expected, the team found that performing this task 30 minutes a day for several weeks after injury resulted in greatly improved motor function. To estimate changes in brain activity associated with the recovery, they imaged the regional brain activity using H215O-positron emission tomography (PET) before injury and at the early and late stages of recovery while monkeys performed the task. They found that activity in the ventral premotor cortex—a brain region somewhat distant from the injury—was higher during the early stage of recovery than before the injury. They also conducted what is known as a psychophysiological interactions (PPI) analysis and found that when monkeys performed the task in the later stages of recovery, connections between the lesion site and regions of primary motor cortex immediately surrounding it became stronger.

To verify whether the changes in these regions were in fact necessary for the recovery, they temporarily inactivated them before injury and at the recovery stages. They found that inactivation of the ventral premotor region on the same side of the brain as the lesion impaired precision grip during the early stages of recovery—even when it was limited to regions that had not been essential to hand movements before the injury. They also found that the area surrounding the injury became devoted to movements related to precision grip. During the later stage of recovery, inactivating this area only affected precision grips, but not other types of grips that had been impaired by inactivation before the lesion. 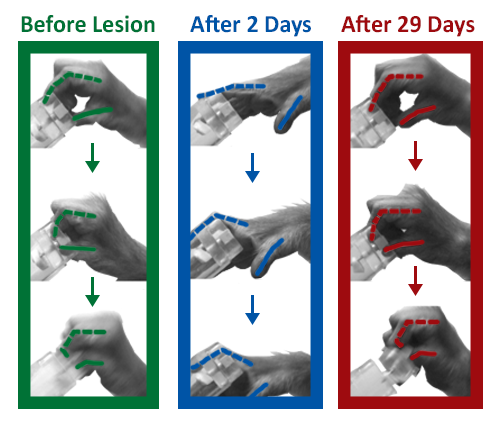 Performance on the precision-grip task

Two days after lesion, monkeys perform poorly compared to before the injury. Twenty-nine days after injury performance was greatly improved and resembled that from before injury. 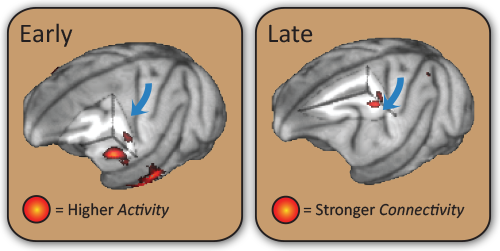 (Left) Activity in the ventral premotor cortex was higher during the early stage of recovery. Note that this region is somewhat far from the lesion. (Right) Functional connections between the lesion site and regions of primary motor cortex immediately surrounding it became stronger in the later stages of recovery. The blue arrow points to the lesion site.