Insights into a rare genetic disease

Recently, a grassroots effort initiated by families and clinicians led to the discovery of a human genetic disorder with severe consequences that is linked to a mutation in the human NGLY1 gene. In a big step towards understanding the effects of this mutation, research by scientists at the RIKEN-Max Planck Joint Research Center in Japan implicates the enzyme ENGase as the factor responsible for deficient protein degradation that occurs in the absence of mouse Ngly1 gene expression. Published in Proceedings of the National Academy of Science, the paper details how lack of the Ngly1 peptide results in the incomplete removal of the sugar portion of glycoproteins—a process called deglycosylation. The result is that proteins that should be broken down in the cytosol are instead aggregated in the cells.

The ability of proteins to function and interact with other molecules properly often depends on their three-dimensional configuration, which can be changed through the addition or subtraction of sugar chains. When proteins are not made correctly, they are sent to be broken down in the cytosol. NGLY1 is a cytosolic enzyme that removes the sugar chains from specific types of glycoproteins, and ENGase is another cytosolic enzyme in animal cells that degrades the free sugars left behind. The big question is whether NGLY1 deficiency affects protein degradation, and if so, how.

The RIKEN researchers tackled this problem by first creating a model glycoprotein for examining this process in animal cells. Next, they expressed the model protein in cells derived from four types of mice—wild-type, Ngly1 knockout, Engaseknockout, and double knockout—and measured how much of the model protein was degraded and how much of the undegraded portion still had attached sugar chains.

Next, they inhibited protein synthesis in these four types of cells and found that normal protein degradation—both sugared and de-sugared—proceeded in the wild-type, Engase knockout, and double knockout cells. Critically, the amount of de-sugared protein remained high and undegraded in the Ngly1 knockout cells.

This indicated two key points. First, removal of sugar chains by ENGase appeared to have created a form of the protein that, in the absence of Ngly1 could not be degraded properly. To confirm this hypothesis, they used mass spectrometry and showed that when the model protein was de-sugared by ENGase, one sugar molecule remained attached to the protein. Second, normal protein degradation in the double knockout indicates that deglycosylation of the model protein by Ngly1 was not necessary as long as the incomplete removal of sugars by ENGase was prevented.

People with the NGLY1 mutation have many severe symptoms, from delayed development and epilepsy to abnormal liver function and the inability to make tears. The leader of the research effort, Tadashi Suzuki, notes that while “it is currently unclear how these symptoms correlate with reduced protein degradation caused by insoluble aggregates, if the abnormal aggregation of this type of glycoprotein is somehow related to them, it is tempting to speculate that inhibition of ENGase activity may serve as a therapeutic target for patients carrying mutations in the NGLY1 gene.” He adds that as a proud advocate of curiosity-driven scientific research and the importance of glycoproteins in everyone’s life, “I’m happy that there are still so many outstanding questions in my field that need to be explored.” 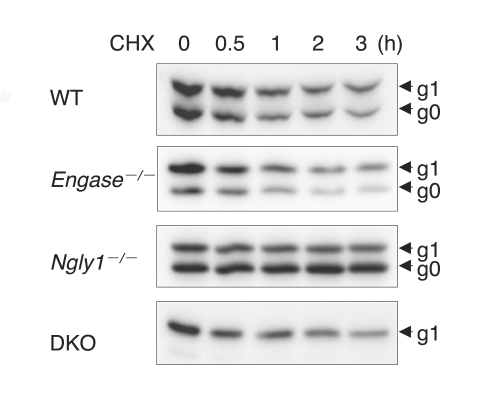 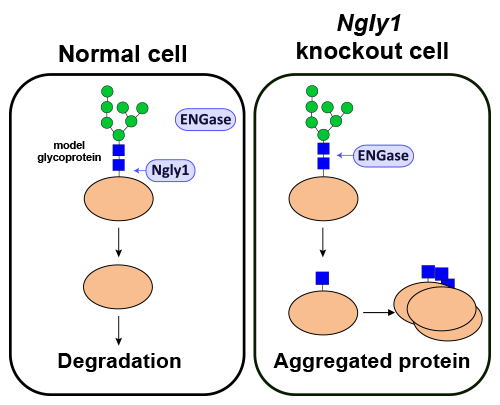 (Left) In normal cells, misfolded proteins are deglycosylated predominantly by Ngly1 and are degraded efficiently. (Right) In the absence of Ngly1, ENGase acts on some portion of unfolded glycoproteins, which leaves a portion of the N-glycan (called N-GlcNAc). These proteins aggregate and could somehow be detrimental to the cells.