Revealing the workings of a master switch for plant growth

In a discovery that could pave the way to higher crop and biomass productivity, scientists from RIKEN in Japan, along with colleagues from the University of Tokyo, have shed new light on the complex interplay that allows a master switch to control the growth of plants. In the research, published in The Plant Cell, the group discovered a new cell mechanism, centered around a protein called BSS1/BZR1, that allows for precise control of plant height by regulating plant brassinosteroid signaling.

Brassinosteroids, a class of plant steroid hormones, play an important role in promoting plant growth as well as a host of development processes including cell elongation and division, development of the xylem, which is used for water and nutrient transport, and adaptation to differing light conditions. However, as brassinosteroids are very expensive to produce, they cannot be used directly for agriculture and plant biomass production.

Though the importance of brassinosteroids is understood, the precise mechanisms through which they perform their functions in plants have remained unclear. Thus, one important avenue of plant research, according to Takeshi Nakano of the RIKEN Center for Sustainable Resource Science (CSRS), who led the study, "has been to identify brassinosteroid signaling genes, and then use plant engineering to apply these genes to genetically modified plants in order to increase plant growth by up-regulation of these mechanisms, leading eventually to higher productivity for crop production as well as biomass production. This could provide ways to decrease CO2 by fixing it in plant body materials."

With the tools of chemical biology—a field which involves applying chemical techniques to the study of biological system—using mutant plants and Brz, a brassinosteroid biosynthesis inhibitor, the group focused on the mechanism of BIL1, a master switch that regulates some 3,000 genes, making up fully 10% of the 30,000 genes of the model plant Arabidopsis. Through chemical biology they discovered a protein called BSS1, which interacts with BIL1 to negatively regulate brassinosteroid signaling. BIL1 was known to be imported into the nucleus of the cell by brassinosteroid stimulation, but the molecular mechanism was not understood. As they examined the movement of BSS1 in brassinosteroid-deficient cells, the scientists were surprised to discover that the creation of a complex of large proteins suppressed plant stem elongation. They were able to determine the detailed mechanism through which BIL1 is captured by the formation of this protein complex with BSS1, and discovered, unexpectedly, that the breakdown of this complex by brassinosteroids seems to allow BIL1 to move into the nucleus. Thus, it appears that the interplay between BSS1 and brassinosteroids leads to the formation of the complex, resulting in shortened plant height, while conversely the breakdown of the complex leads to stem elongation and greater height.

According to Nakano, "This is very significant for plant scientists as such a phenomenon is a rare system whereby the mechanism of bioactive chemicals can regulate protein dynamics through the process of protein complex formation or dissociation, and finally regulate plant development. Based on these findings, we hope to be able to develop technologies to allow us to freely control the plant height of plant biomass and useful crops, and contribute to reducing CO2 in the atmosphere."

This interdisciplinary research was made possible by collaborations among chemical biologists such as Nakano, under the leadership of Hiroyuki Osada at RIKEN and Tadao Asami at the University of Tokyo's Biological Control Chemistry lab, using mutant plant resources and know-how from biomass engineering and plant scientists accumulated at CSRS. The study was done under the Strategic Research Program (CREST) of the Japan Science and Technology Agency (JST). 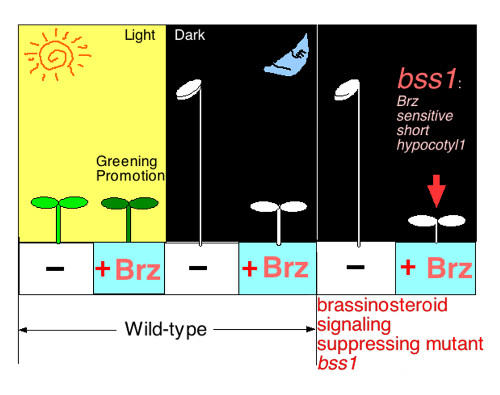 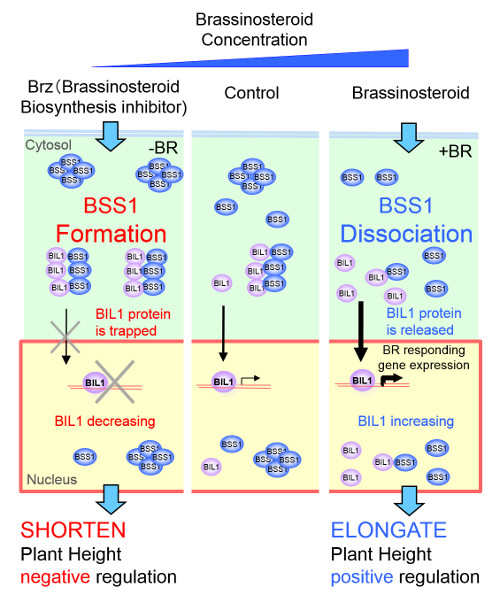