Cool clocks pave the way to new measurements of the earth

We all like to know our watches keep the time well, but Hidetoshi Katori, of RIKEN's Quantum Metrology Laboratory and the University of Tokyo's Graduate School of Engineering, is taking precision to an entirely new dimension. In work published in Nature Photonics, Katori's group demonstrated two cryogenically cooled optical lattice clocks that can be synchronized to a tremendous one part in 2.0 x 10-18—meaning that they would only go out of synch by a second in 16 billion years. This is nearly 1,000 times more precise than the current international timekeeping standard cesium atomic clock.

While nobody really needs a watch that precise, the development of this clock could be pivotal in opening the path to a long-held dream, clock-based geodesy. Relativistic geodesy, as it is also known, is a new way of making measurements of the shape of the earth, taking advantage of the fact that in accordance with Einstein's general principle of relativity, clocks in a strong gravitational field will tick more slowly than those in a lower field. As a result, a clock that is located slightly further away from the center of the earth will run a little faster than one closer to the center. The difference is extremely slight, however, as a clock set one kilometer above another will only run a few seconds ahead of another in a million years.

However, optical lattice clocks are so fantastically precise that they offer the prospect of actually using the tiny difference to make measurements of the strength of the gravitational potential at different locations and different times, creating a new role for clocks beyond their traditional role as time-keepers. This would make it possible to use clocks to take measurements of how different parts of the earth are moving, upward or downward, relative to others, and thus could contribute to a better understanding of geological processes such as those that lead to earthquakes.

To perform the feat, the group developed two optical lattice clocks, with atoms of strontium held in a laser-generated optical lattice with a "magic" wavelength, discovered by Katori, that allows precise measurement. At this wavelength, the laser-generated optical lattice does not affect the atoms To eliminate perturbations from blackbody radiation—one of the principle sources of disturbances for the experiments—the containers were cooled to about -180 degrees Celsius using a special refrigerator, and the insides were coated in black to prevent reflections from even the small amount of light seeping in through the two holes, with diameters of just a millimeter and a half-millimeter, that were opened to allow the atoms and the lasers necessary to trap them in place in the set-up. The strontium atoms were then inserted into the optical lattice, and the electronic transition frequency was compared between the two clocks for a period of a month. The results confirmed that great precision could be achieved with these clocks.

According to Katori, "It was a great feeling to have shown this excellent agreement between the clocks. If we can miniaturize this technology further, it would have useful applications, since tiny fluctuations in gravitational potential could be used to detect underground resources, underground spaces, and the movement of lava. We also hope that in the future, this will accelerate the movement toward a new definition of the international second, based on optical lattice clocks, to an even more stringent standard than the current definition of the second, which is based on cesium oscillation."

This research was funded under the Katori Innovative Space-Time Project of the Japan Science and Technology Agency's ERATO program. 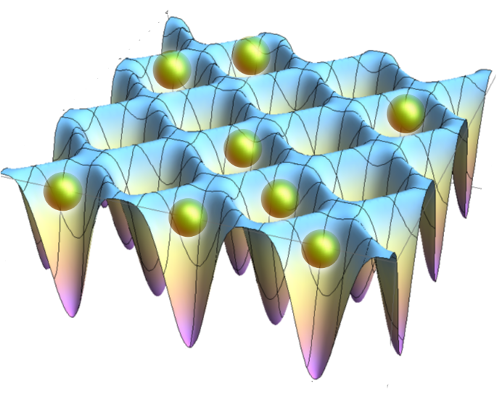 Schematic representation of an optical lattice

Interference of laser beams creates an “egg box” optical lattice in which each “cup” holds a single atom. 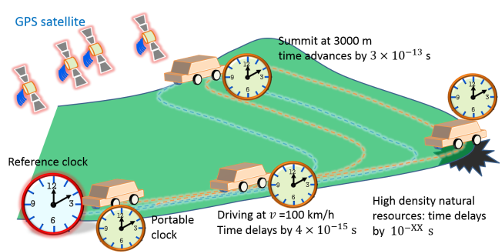