A team led by Marco Casolino of the RIKEN Global Research Cluster's EUSO Team and Masayuki Goto of G-Tech corporation, a private company engaged in the development of radiation measurement equipment, have used technology originally designed for use in outer space to create a new system, called LANFOS, which can inexpensively and non-destructively detect radioactive cesium contamination in food, separating it from the background of radiation caused by natural levels of radioactive potassium.

The research was initiated in response to the accident at the Fukushima Daiichi Nuclear Power Plant in 2011 following the Great East Japan Earthquake and tsunami. Farmers in nearby areas have faced hardships due to consumer fears about contamination, and measuring contamination in agricultural products was seen as a key to restoring public confidence. However, most monitoring is currently done with scintillation detectors that are located at the bottom of the testing container, requiring food to be ground into pieces so that it can be close enough to the detector to be accurately measured. Hence, the food put on store shelves cannot be the food that was actually measured.

With the hope to ameliorate this situation, the joint team set out to develop a device with the scintillator set around the whole inner surface of the container, employing a lightweight plastic scintillator. However, according to Marco Casolino, "We faced a difficulty. Plastic scintillators are not sensitive enough to easily distinguish between the naturally occurring potassium 40 and the artificial cesium isotopes. This is a problem because official regulations set the maximum level of cesium at near the level of natural potassium 40. Fortunately, we were able to develop a mathematical algorithm to separate the two taking advantage of the initial difference in photon energy, and now we are able to reliably detect the level of cesium in a large container, without harming the materials."

A key element to the device is a silicon photomultiplier, a type of device that was developed for use in space-based observatories. According to Casolino, "This type of photomultiplier has certain characteristics that make them good choices for use in space, such as low power consumption and low cost. These same characteristics made them good choices for our detector."

A prototype of the LANFOS device, which is large enough to test entire food samples, was fabricated by G-Tech and tested at a festival in Minamisoma City, Fukushima, one of the areas contaminated by the accident. The device was tested on samples including potatoes, cabbage, and Japanese pears. According to Casolino, "The local people were impressed at the machine’s ability to rapidly give them a read-out of levels of radiation in the food, and this gave them hope that consumers might become more confident about buying their products."

This research was funded under the JST Development of Advanced Measurement and Analysis program. The system is scheduled to be presented on March 24 at the 70th Annual Meeting of the Physical Society of Japan. 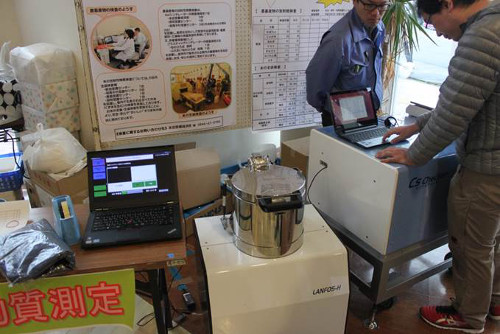 The detector system on display 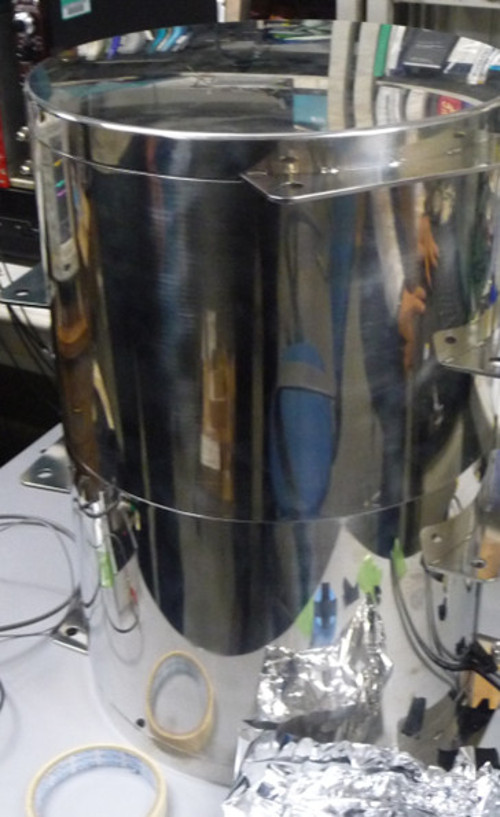