Scientists in a collaboration led by Dai Takei of the RIKEN SPring-8 Center in Japan have, for the first time, examined a detailed "time lapse" X-ray image of the expansion of a classical nova explosion using the GK Persei nova—a binary star system which underwent a nova explosion in 1901. Through this work, published in The Astrophysical Journal, they hope to gain a better understanding of the expansion of gases in the universe, including not only in classical novae but also in supernovae—tremendous stellar explosions that are believed to be responsible for the creation of heavy elements such as uranium which cannot be produced by normal stars.

There is great interest in understanding the dynamics of stellar explosions and especially supernovae, which are among the most powerful events that we know of in the universe. In these explosions, a collapsing star can outshine an entire galaxy. These events take place over enormous spans of time—the whole written history of mankind—so it is unfortunately impossible to observe the whole process as the remnant of the exploding star spreads out into the interstellar medium around it. As a result, scientists have traditionally relied on comparing snapshots taken of different supernova believed to be in different stages of evolution, as well as computer simulations.

Takei says, "I wanted to understand how these explosions unfold, but there were many obstacles. We thus took on the challenge of, instead of looking at supernovae, studying the expansion of a classical nova explosion, since this process is expected to develop within approximately a human lifetime." Though classical novae and supernovae are different processes, the fundamental mechanism through which we see them—a shock wave created by an explosion—is essentially the same.

"The GK Persei nova," Takei continued, "which was discovered in 1901, provided the perfect model for our study." GK Persei is believed to be a binary star system consisting of a white dwarf—a dead star in the sense that it has reached the end of its thermonuclear phase—and a companion, which may be a red dwarf that is still alive, meaning that hydrogen is still burning on its surface. The matter from the companion accretes onto the surface of the white dwarf, and occasionally, when it reaches a certain critical point, thermonuclear runaway starts, ejecting the white dwarf layer outward into an explosion.

Taking advantage of the fact that the development of the nova remnant is relatively rapid, the team examined X-ray snapshots of the nova taken in 2000 and 2013 by the same telescope, NASA's space-based Chandra observatory, and compared the X-ray emissions—created as the expanding gases heat the interstellar medium into a plasma—between the two eras.

What they found from the study was that although the nova remnant had expanded by approximately 90 billion kilometers during the 14 years—an amazingly precise measurement considering the star system is roughly 1,500 light years away, and implying that it is expanding by approximately 300 kilometers per second—the temperature of the plasma remained at a nearly constant 1 million degrees Celsius. The light was fading but the energy of the dominant photons had not changed, implying that the nova remnant is expanding into a region of lower density. "For the first time," says Takei, "we have a detailed image of how the nova propagates through space. Through this kind of study, we hope to be able to understand exactly how these powerful explosions expand into interstellar space, and it may ultimately give us new insights into the history of the cosmos." 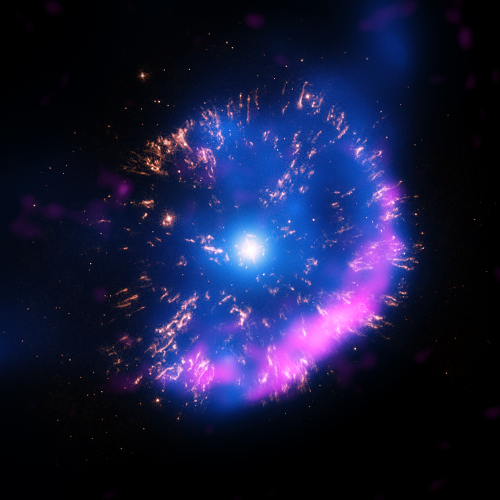