Hyperactivity and social abnormalities are defining characteristics of ADHD and autism, two developmental disorders that parents and scientists around the world are struggling to understand. At the RIKEN Brain Science Institute in Japan, researchers have identified the protein IRBIT as a key player in preventing these behaviors from developing. Published in Proceedings of the National Academy of Sciences, the work shows that IRBIT plays a role in regulating dopamine levels in the brain and that its absence can lead to both hyperactivity and abnormal social behavior.

The protein IRBIT is abundant in dendrites—the parts of neurons that receive input from neighboring axons. In order to understand IRBIT’s function, the research team first determined what other proteins interact with it. Using mass-spectrometry analysis they identified the enzyme calcium calmodulin (CaM)-dependent protein kinase II alpha (CaMKIIα) as a potential candidate, and further tests confirmed that IRBIT and CaMKIIα are found together in the same dendrites.

After verifying that IRBIT binds to CaMKIIα, they determined exactly where on the CaMKIIα enzyme this occurs. This is important because regulation in the body is generally controlled by competition between molecules for the same binding spot—when one molecule is blocked from binding, it can prevent cascades of reactions from happening.

When CaM binds to CaMKIIα, CaMKIIα becomes active and can trigger a series of reactions that begin with the addition of a phosphate group to another protein—a process called phosphorylation. Tests in both culture and live cells revealed that IRBIT binds to the same region of CaMKIIα that is used by CaM, prevents CaMKIIα from phosphorylating its target proteins, and can become disassociated from CaMKIIα if enough CaM is present to beat it to the binding spot.

In some neurons, CaMKIIα forms a complex with a receptor for the neurotransmitter glutamate. When these neurons are stimulated by glutamate, calcium enters the cell and binds to CaMKIIα, making it ready to act. The team investigated how this process is altered in IRBIT knockout mice and found that stimulating hippocampal neurons produced extra-long lasting CaMKIIα activity, indicating that IRBIT normally acts to inhibit excessive CaMKIIα activity in these neurons.

When the team looked at the behavior of the IRBIT knockout mice, they found that they were more active in both open settings and in their home cages, and that they interacted with and touched other mice more often than control mice did. When tested, the IRBIT knockout mice showed abnormally high levels of dopamine and norepinephrine in the prefrontal cortex, hippocampus, and striatum—regions of the brain involved in social behavior, learning/memory, and reward.

These finding are important because they show how IRBIT normally acts to maintain the correct balance of dopamine, and how its lack can lead to hyperactivity and abnormal social interaction. Team leader Katsuhiko Mikoshiba notes that, “When we observed increased hyperactivity and social abnormalities in the IRBIT KO mice, we were excited and speculated that dopamine might be abnormal.” He added, “The strong link between IRBIT, dopamine, and abnormalities in locomotor and social activity opens up the possibility that IRBIT dysfunction is related to human developmental disorders such as ADHD and autism.” 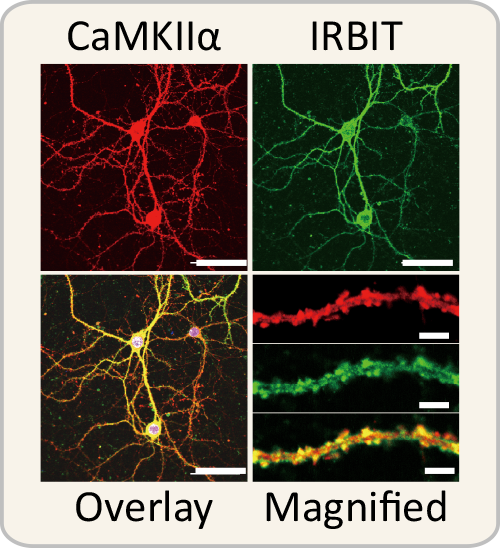 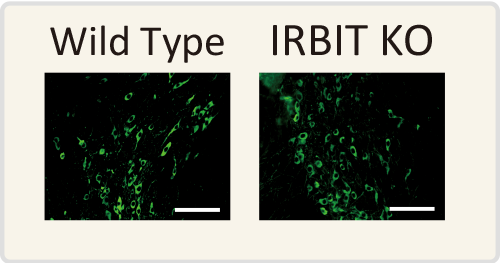 Levels of phosphorylated tyrosine hydroxylase were significantly higher in IRBIT knockout (KO) mice. This led to increased dopamine production, hyperactivity, and abnormal social behavior. Lower panels are magnifications of the regions bounded by white rectangles in the upper panels.