Researchers at the RIKEN Brain Science Institute have uncovered a new mechanism for the regulation of blood pressure. Published in Molecular Cell, the study links events at the single-cell level to a system-level effect, showing that blood pressure can drop dramatically if the protein ERAP1 is released from cells and enters the blood stream.

Because high blood pressure is a primary risk factor for stroke, heart disease, and diabetes, understanding how our bodies naturally regulate blood pressure is essential for developing treatments that help keep it at normal levels. Towards this end, the RIKEN team began their investigation when they saw that mice lacking the protein ERp44 had lower than normal blood pressure. "We noticed that the mice had similar defects to those that lack angiotensin II—the peptide hormone that acts to raise blood pressure," said lead author Chihiro Hisatsune. "We measured their blood pressure and were surprised to find it was about 20% lower than in normal mice."

A direct investigation showed that angiotensin II—a peptide hormone vital for maintaining blood pressure—in these ERp44 knockout mice was removed from circulation faster than in normal mice, explaining the drop in blood pressure. ERp44 is a multi-functional protein located in the endoplasmic reticulum—the place where proteins are folded into their proper shapes before being released into the rest of a cell. To determine why angiotensin II did not remain in the blood of these mice, researchers searched for proteins that bind to ERp44 inside cells and are also able to leave cells and enter the blood stream where they can interact with angiotensin.

They found that the enzyme ERAP1—an aminopeptidase whose job is to cleave peptides like angiotensin—normally binds to ERp44 when the oxygen level inside of the endoplasmic reticulum is high and is released into the blood when the endoplasmic reticulum environment is reducing, that is when oxygen is low. Without any ERp44, all the ERAP1 in the knockout mice was free to enter the blood stream where it digested angiotensin II, resulting in lower than normal blood pressure in the knockout mice.

Conversely, the research team also discovered that the amount of cellular Erp44 increases when a system-wide infection causes blood pressure to drop dangerously low. This increase creates more opportunities for ERAP1 to bind, and reduces its chance of getting into the blood stream. The net result is that angiotensin remains in the blood to prevent the pressure from dropping even lower.

"Current therapies for hypertension," he continues, "target the enzyme that produces angiotensin II. Our results open the door to alternative approaches that target the activity of proteins like ERAP1 and ERp44. We hope our results can lead to the development of new strategies for treating people with blood-pressure disorders." 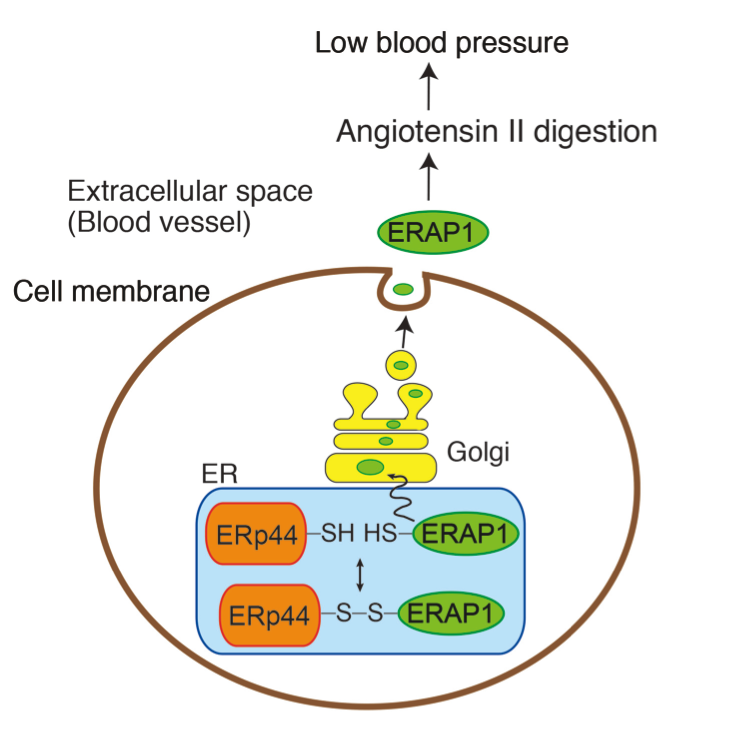 ERp44 binds to ERAP1 and tethers ERAP1 within the ER. When oxygen is in short supply, ERAP1 is released and secreted into the extracellular space (blood vessel), where it digests angiotensin II and decreases blood pressure.