Switching off brain circuit renders mice “out of touch” with environment

The sense of touch is important but often taken for granted in daily life because it seems simple and automatic. New research suggests that the apparent simplicity of tactile sensation comes from a clever two-stage brain circuit. By manipulating this circuit with light-driven optical genetic tools, researchers made laboratory mice literally “lose touch” with their surroundings as their feet became unable to sense rough or smooth surfaces.

The study published in Neuron by an international collaboration including the RIKEN Brain Science Institute in Japan shows that the perception of touch relies on two signals, one from the skin to the brain and another within the brain itself. This second signal relays the first signal from a lower-level brain area to a higher one and then boomerangs it back to the lower level. The higher brain area is required for touch perception and its inactivation renders mice unable to use sensations in their footpads to discriminate different floor textures.

The research team led by Dr. Masanori Murayama observed the brains of mice after touching their paws and saw immediate activity in the sensory cortex—the brain area that receives signals from the skin. Unexpectedly, they recorded a second slower source of activity tens of milliseconds after the first. Murayama explains, “we investigated the source of this second activation and found that high level motor cortex receives information from the sensory cortex and sends it back to the sensory cortex. This means that, for tactile perception, the flow of information from the skin to brain requires communication not only from the periphery to the brain but also reverberation between two brain areas.”

While it was previously thought that one signal from the skin to the brain was sufficient to produce touch sensation, this study reveals that without the second signal, mice cannot feel or use the incoming sensory information, suggesting that they may not even perceive differences in texture. To investigate this idea, the researchers trained mice to distinguish two different floor textures, rough or smooth, by associating one of them with a food reward. When they prevented the second signal by shutting off the responsible neurons with light-activated optical genetic technology, the mice could not distinguish differences in floor texture.

“Our results show that a reverberant neural circuit from sensory cortex to higher motor cortex is required for the perception of touch”, said lead researcher Satoshi Manita. Murayama speculates that this two-stage circuit design may be a safety mechanism to ensure continuous accurate perception even when distracted by other senses, such as when feeling a steering wheel while concentrating on the road. “This form of perception, an external signal and its internal rebound, may extend to other senses,” concludes Murayama, “and we may find that communication between brain areas refines perception for more accurate and integrated behavior.” 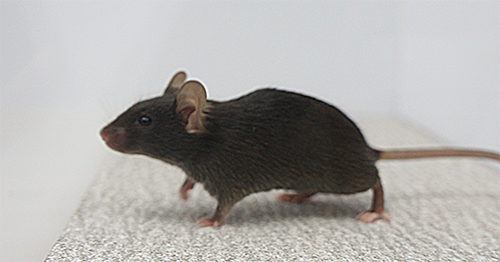 Mice were trained to distinguish rough and smooth surfaces with their feet. After temporarily switching off a brain circuit with LED light, mice could no longer perceive the tactile information reaching their brains.