Retrograde amnesia is the inability to recall established memories. In humans, amnesia is associated with traumatic brain injury, Alzheimer’s disease, and other neurological conditions. Whether memories lost to amnesia are completely erased or merely unable to be recalled remains an open question. Now, in a finding that casts new light on the nature of memory, published in Science, researchers from the RIKEN-MIT Center for Neural Circuit Genetics demonstrated in mice that traces of old memories do remain in the amnestic brain, and that the cellular pathways underlying them can be reactivated, allowing lost memories to be found.

The research team, led by Susumu Tonegawa, Director of the RIKEN Brain Science Institute in Saitama, Japan, was interested in how stable memories are formed in the brain and whether memories whose storage was disrupted by chemically inducing retrograde amnesia, could still be recalled. "Brain researchers have been divided for decades on whether amnesia is caused by an impairment in the storage of a memory, or in its recall," said Tonegawa.

To make mice amnestic, they were first trained to associate a mild foot shock with a specific environment, chamber A, eliciting a typical "freezing" behavior. Eventually, trained mice would freeze in chamber A even without the shock. Neurons activated during memory formation were genetically labeled to allow their visualization and reactivation. Then, some mice were given a chemical, anisomycin, which inhibits new protein synthesis and prevents increases in synaptic strength important for memory encoding, thus inducing retrograde amnesia. Other mice received saline as a control. As expected, amnestic mice returned to chamber A did not freeze, indicating that they could not recall the memory for the specific association of the chamber and the mild foot shock.

Next, to investigate whether the stored memory from the foot shock training in chamber A was absent from the amnestic mice or remained present but was not retrievable, the researchers used optogenetic technology to selectively activate neurons that were genetically labeled during their training in chamber A with a blue light-sensitive protein, channelrhodopsin, but this time while the mice were in a novel, neutral environment, chamber B. Surprisingly, during activation of the cells involved in the foot shock memory, collectively called a "memory engram", with blue light pulses, the amnestic mice froze just as much as the control mice, indicating that they remembered that they had acquired the memory, even though they could not recall it when placed in chamber A.

To explain how the "lost" memory was recalled during light stimulation of the memory engram, despite the induction of retrograde amnesia, the authors suggest that different processes may control memory encoding and recall. For example, during the training period, brain connections between unique memory engrams in neighboring brain structures may be strengthened and once this has occurred, may not require an increase in synaptic strength in order to store, but not recall, the contextual fear memory and would be preserved in the amnestic state. Indeed, they observed that connectivity was enhanced between memory engram cells in the fear memory-holding amygdala and context memory-holding hippocampus of amnestic mice, even though synaptic changes remained stable.

"Our conclusion," says Tonegawa, "is that in retrograde amnesia, past memories may not be erased, but could simply be lost and inaccessible for recall. These findings provide striking insight into the fleeting nature of memories, and will stimulate future research on the biology of memory and its clinical restoration." 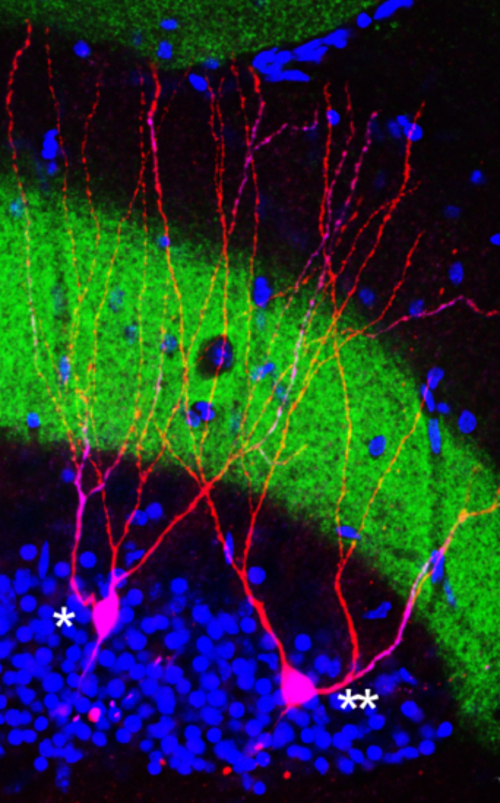 Two cells in the mouse hippocampus; one was involved in the memory engram (**) and one was not involved (*).