A dictionary of the language of cells

In their struggle to survive and prosper, multicellular organisms rely on a complex network of communication between cells, which in humans are believed to number about 40 trillion. Now, in a study published in Nature Communications, a research group led by scientists from the RIKEN Center for Life Science Technologies (CLST) has published an overall map of how the cells in the human body communicate by systematically analyzing the relationship between ligands—substances such as insulin and interferon that embody messages between cells, and receptors—the proteins on cell surfaces that receive these messages when bound by the ligands.

The group looked at the expression of 1,894 ligand-receptor pairs—based on 642 ligands and 589 receptors—that have been reported in the literature so far, and drew up a large-scale map of cell-to-cell communication between 144 primary human cell types. The survey found that most cells express tens or even hundreds of ligands and receptors, creating a highly connected signaling network made up of cell types that can communicate with each other through multiple ligand-receptor paths.

The development of multicellular organisms from unicellular ancestors is one of the most profound evolutionary events in the history of life on Earth. During this transition, the cells of multicellular organisms began to communicate with each another in many ways, playing specific roles in the development and then control of their cellular functions. This process is particularly critical during early embryonic development when a cell’s differentiation and ultimate fate are controlled by communication with neighboring cells. In the developed organism, intercellular communication coordinates the activities between multiple cell types and makes organism-wide processes such as immune response, growth, and homeostasis. Defects in cell-cell communication, including the dysregulation of autocrine signaling, are also implied in the development of cancer, and autoimmune and metabolic diseases.

Despite the importance of this process, studies in intercellular communication between specialized cells in higher organisms such as mammals have generally focused on communication between just a few cell types and have been limited in scope to small numbers of ligand-receptor pairs. Currently there are no reports based on systematic studies attempting to elucidate and quantify the repertoire of signaling routes between different cell types.

To address this, the group looked at gene-expression data measured by the CAGE method in the RIKEN-led FANTOM5 project, using information from existing databases and large numbers of past publications, to generate the first large-scale draft map of primary cell-to-cell interactions.

Based on the analysis, the authors gained new insights into how cells communicate. According to Jordan Ramilowski, the first author of the study, “One intriguing conclusion is that signals between cells of the same type are surprisingly common, accounting for approximately two-thirds of cell-cell partners. We also discovered that receptors in general seem to have evolved earlier than ligands.”

According to Alistair Forrest, who led the project, “Elucidating how cells communicate in an organism can contribute to the development of medical treatments. In particular, this data can be a key to discovering receptors that can be targets for therapies in various diseases.”

Considering the importance of these findings for the development of new medical therapeutics, the team has decided to publish the data online. The database is available online at FANTOM website.

The FANTOM project (for Functional Annotation of the Mammalian genome) is a RIKEN initiative launched in 2000 to build a complete library of human genes using the capabilities offered by new, state-of-the-art cDNA technologies. Over 250 experts in primary cell biology and bioinformatics from 114 institutions based in more than 20 countries and regions are working as part of FANTOM 5, the 5th edition of the project. 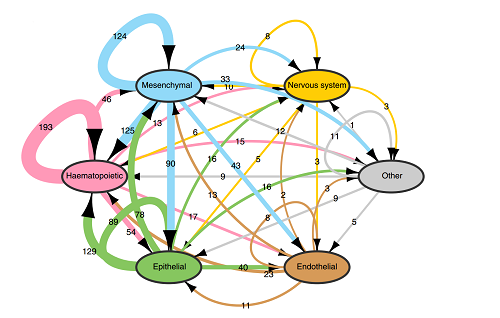 Schematic of the ligand-receptor network

The figure shows how cells of different biological functions and origins (lineages) interact with each other. The thick lines emphasize the importance of intra-lineage signaling (signaling between cells of the same lineage).