Healing spinal cord damage is an incredibly difficult problem because neurons have to be reconnected in a precise fashion, and there are still many mysteries surrounding how this occurs. Now, scientists at the RIKEN Brain Science Institute in Japan have discovered that in addition to proteins, lipids are also necessary for guiding axons. Published in Science, the study shows how a phospholipid released by glial cells—the cells in the nervous system that support neurons—controls the positioning of sensory neurons within the spinal cord.

Axons—the long extensions of neurons—are the roads that allow neural information to travel from place to place, and their pathways are typically specific for each of our senses, eventually reaching different places in our brains and spinal cords. During development, the growth of axons is guided by a patterned distribution of molecules that either attract or repel them, forcing them to go in the proper direction.

“While many proteins are known to direct axon growth and network formation,” says Senior Team Leader Hiroyuki Kamiguchi, “we discovered that glial cells have the ability to release membrane structural lipids in specific patterns that can then control axon migration and neuron organization. In this case, we found that a lipid called LysoPtdGlc has a major role in separating axons of pain- and position-sensing neurons from each other.”

When researchers labeled spinal cord sections from chicks with markers for LysoPtdGlc and the two different types of sensory neurons, they found that LysoPtdGlc was located only near the midline region where position-sensing axons are located. This led the team to hypothesize that when axons of pain-sensing neurons encounter LysoPtdGlc, they are repulsed away from this midline area, and forced to travel in the more lateral region of the spinal cord.

The researchers then moved their experiments out of the petri dish and injected the antibody into the spinal cord of chick embryos. Their hypothesis that LysoPtdGlc was responsible for directing axon growth proved correct; the axons of pain-sensing neurons were no longer repelled, and instead migrated into the region on the spinal cord reserved for position-sensitive neurons.

Kamiguchi notes, “lipid research is technically difficult but has the potential to uncover important biological processes that are not governed by protein-based mechanisms.” Living up to this prediction, the team was able to uncover how LysoPtdGlc repels pain-sensing neuron fibers.

After determining that LysoPtdGlc’s ability to repel pain-sensing axons was controlled through a particular type of protein receptor on axons, the team tested over 100 receptors and found one—GPR55—that responded well to LysoPtdGlc. The team confirmed that this protein is also expressed in the spinal cord, and when they labeled axons in GPR55 knockout mice, they found pain-sensing axons had erroneously entered the upper-medial portion of the spinal cord—similar to when they had blocked LysoPtdGlc function by injecting the antibody into chick spinal cords.

“With these findings” says Kamiguchi, “we can begin to investigate whether this lipid-based signaling system can be a therapeutic target for spinal cord injury. I hope that our success here can facilitate interdisciplinary collaboration aimed at tackling other issues related to axon guidance.” 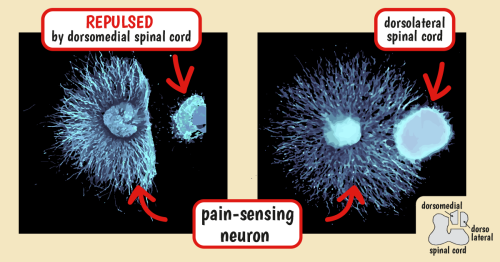 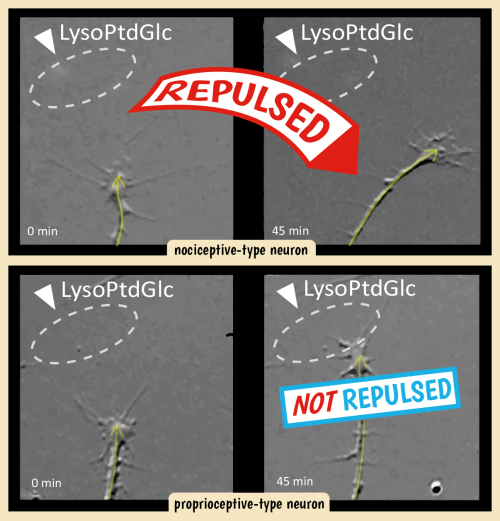 After 45 minutes, a nociceptive (pain-sensing) neuron has been guided to the right after being repelled away from the LysoPtdGlc gradient (top). In contrast, a proprioceptive (position-sensing) neuron continues on a straight course (bottom).