Observing one person threatening another is a commonplace event. Now, in research published in eLife, scientists have used large-scale neural recording and big data analysis in monkeys to enable a first glimpse of the brain remembering and recalling the memory of such negative social interactions. The research reveals the complex structure of a neural network for the observation of a negative social interaction and its retrieval from memory.

The research, conducted by Naotaka Fujii and colleagues at the RIKEN Brain Science Institute in Japan, answers the long-standing question of whether the memory of an observed social encounter can be formed and recalled via the same neural pathway. To test this idea, the authors overlaid a 128-channel large-scale recording array on a monkey cortex to record electrical activity while the subject watched videos of one monkey threatening another. In control studies, the videos showed non-threatening interactions.

The researchers recorded the brain activity data to a server and used Big Data analytical techniques to calculate a multidimensional value called ERC (Event Related Causality) that indexed the continuous evolution of brain activity in time, space, and the direction of communication between brain areas during the task. The ERC in turn was decomposed to identify hotspots of network activity the team called “modules” that pinpointed specific epochs in the observed social threat interactions.

The modules revealed a rich dynamic flow of information in the brain network at unprecedented resolution. One module encoded the formation of a memory of the observed social interaction revealing a flow of information from sensory perception areas to higher brain structures. Conversely, animals presented with the cues that were observed in the initial threat encounters, while the threatening monkey was hidden from view, showed the same network with reversed communication flow, suggesting that the same network was used for perceiving and recalling the event.

The results open a window into the structure of brain networks for cognitive processes such as observing the behavior of others. The methods used in the study are generalizable to other situations requiring mental processing. The findings also have implications for the mapping of brain activity by large federal brain projects including the US BRAIN initiative and EU Human Brain Project indicating that technologies that measure brain activity should aim to monitor not only large populations of neurons but also their network communication structures. 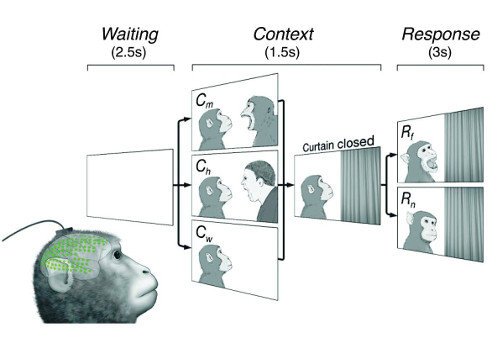 Recordings were taken while monkeys first watched videos showing a context with one of three interactions between a videotaped monkey and another agent (on the right). Following a wait period, the monkeys were shown a monkey with either a frightened or neutral expression.