REM sleep—the phase of night-time mammalian sleep physiology where dreams occur—has long fascinated scientists, clinicians, philosophers, and artists alike, but the identity of the neurons that control REM sleep, and its function in sleep have been controversial due to a lack of precise genetic methods to study the sleeping brain. Now, in a remarkable demonstration of a recent brain technology, neuroscientists provide the first answers to both questions, identifying a neural circuit in the brain that regulates REM sleep, and showing that REM sleep controls the physiology of the other major sleep phase, called non-REM (NREM) sleep.

The Japanese research team, led by Shigeyoshi Itohara of RIKEN Brain Science Institute and Yu Hayashi of the University of Tsukuba’s International Institute for Integrative Sleep Medicine (WPI-IIIS), published the study in Science this week. The study began when the team noticed that many cells in the brain area called the pons, where REM sleep control was suspected, were actually visitors from a distant brain area, called the rhombic lip, during early embryonic development. Like neural detectives, the team reasoned that if they could mark rhombic lip cells, they could track their migration to the pons and artificially reactivate them during sleep. However, no such method existed, until recently.

Enter a method called DREADD, standing for “Designer Receptors Exclusively Activated by Designer Drugs.” The genetic technique involved transgenic mice that express a DREADD receptor in rhombic lip cells that express Atoh1 during the developmental stage, and which then migrate to the pons. The researchers applied a drug that binds to the receptor called CNO to activate the cells in the pons during sleep measured by observing brain activity from electrodes placed on the head. The data showed that activating Atoh1 cells that are excitatory could suppress REM sleep, leading to an increase of NREM sleep. A second pool of REM inhibitory cells was also identified that are downstream from Atoh1 cells.

After identifying the cells responsible for inhibiting REM sleep, the researchers moved on to examine the role of the REM phase in general sleep physiology. They took recordings from the brains of mice during NREM sleep that is characterized by large slow waves of activity that sweep through the brain, in contrast to the relatively quiet, desynchronized activity in REM sleep. Using the DREADD system they shortened or elongated REM sleep and were surprised to find that the amplitude of slow waves during the following NREM sleep became correspondingly smaller or larger. The results demonstrate for the first time that sleep phases interact in a hierarchy, with NREM sleep under the control of REM sleep.

The findings have implications for how and why sleep in mammals evolved to its current two-phase structure. It is known that novel experiences during wakefulness are stored in the brain during subsequent NREM sleep, and that slow waves play an important role in this process. Based on the current study, REM sleep also contributes to this process, because the generation of slow waves during NREM sleep relies on REM sleep. The authors plan to continue using DREADD and other brain research technologies being developed by neuroscientists to try to determine the actual evolutionary role of REM sleep in mammals and find the answers to other mysteries. Among these, they caution that laboratory mice do not have measurable dreams, although they can replay sequences of activity from the prior waking day in NREM. The relationship between REM sleep and the replay of experience in NREM is a future area of interest. 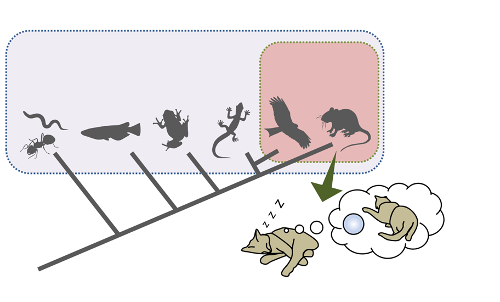 This research showed that in mammals and birds, REM sleep has a deep connection with slow waves.