Secrets of a rice-killing fungal toxin

Researchers at the RIKEN Center for Sustainable Resource Sciences (CSRS) have discovered the enzyme needed for synthesis of tenuazonic acid (TeA), a well-known toxin that is produced by multiple types of fungus and affects fruits, vegetables, rice, and other crops. In their study published in Nature Communications, the authors describe how they found the gene for this enzyme, and reveal that its structure is unique among known enzymes.

Mycotoxins are toxic compounds produced by fungi that are not directly involved in growth, development, or reproduction. These secondary metabolites typically contaminate crops and are a real economic burden for farmers. TeA is known to be produced by at least three different plant pathogenic fungi, and is associated with spoiling of fruits, vegetables, and food-crops, as well as post-harvest decay.

“Now that we know the gene responsible for biosynthesis of this harmful toxin,” notes co-lead author Takayuki Motoyama, “after further testing we might be able to devise a way to regulate its expression and prevent spoilage of important crops.”

When studying microorganisms like fungus, researchers have found that genes for many secondary metabolites are silent under laboratory conditions, which has made finding them especially difficult. The CSRS group led by Hiroyuki Osada has extensive experience studying secondary metabolites, and the team reasoned that OSM1—a gene associated with responses to environmental stress—might also be related to TeA production in Magnaporthe oryzae, a pathogenic rice fungus. While wild-type M. oryzae did not yield any TeA, researchers were able to produce it from OSM1 knockout strains. They were also able to produce TeA by culturing wild-type M. oryzae with 1% dimethylsulphoxide, perhaps as a response to the unfavorable environment.

Having two methods to produce TeA in the lab proved invaluable for identifying the gene responsible for its biosynthesis. To do so, the team performed a DNA microarray analysis using the total RNA extracted under the two conditions that yielded TeA. Only one gene was found to be expressed significantly more in these conditions than when no toxin was produced. Further tests were run to determine whether this gene really is responsible for TeA biosynthesis. First, knocking out this gene yielded a strain that could not produce the toxin, and researchers tentatively renamed the gene TeA synthetase 1—or TAS1. Then, the team created an M. oryzaestrain that overexpressed TAS1, and as expected, this strain produced the toxin under normal conditions.

Next, researchers examined the structure of TAS1 and found that it is a hybrid enzyme containing an NRPS region followed by a PKS region. “This was very surprising”, explains Motoyama. “It was assumed because of TeA’s structure that it would be synthesized by a PKS-NRPS hybrid enzyme. In fact, the order of these regions was totally reversed!” While NRPS-PKS hybrid enzymes have been found in bacteria, TAS1 is the first fungal enzyme for a secondary metabolite to be discovered with an NRPS-PKS structure.

After analyzing how TeA is generated and determining that TAS1 synthesizes it from isoleucine and acetoacetyl-coenzyme A, the researchers searched for homologues in other organisms. While they found several other species of fungi that have genes for homologues sharing the same domain structure, bacterial sources with similar amino acid sequences did not share the same characteristic domain structure. Further research will be needed to find out if this novel enzyme has homologues that biosynthesize other compounds with useful biological functions.

While preventing TeA synthesis might be a goal for crop preservation, TeA also has antitumor, antibacterial, and antiviral properties that could prove beneficial in many situations. Understanding exactly how it is synthesized by TAS1 is therefore an important next step. “Now that we know that the KS domain of TAS1 is unique,” notes co-lead author Choong-Soo Yun, “X-ray crystallographic analysis of this domain will be important for uncovering the reaction mechanism.”

This study was supported in part by the Japanese Science and Technology Research Promotion Program for Agriculture, Forestry, Fisheries, and Food Industry. 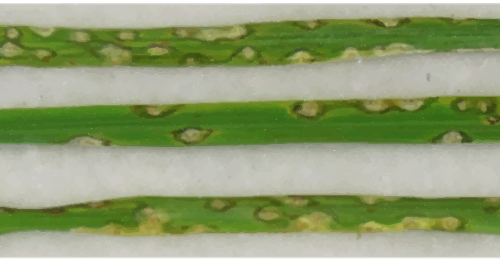