Biomarkers, which allow diseases to be diagnosed and staged based on relatively non-invasive blood tests, have been identified for several types of cancers, but for most cancers remain elusive. Now, research conducted at the RIKEN Center for Life Science Technologies (CLST) in Japan and the Harry Perkins Institute of Medical Research in Australia has identified a large number of genes that are upregulated in many different types of cancer, opening the door for developing biomarker tests that could be used to detect cancers early, allowing for prompt treatment.

The study, published on November 9 in Cancer Research, made use of two different technologies. First, the team looked at data generated by CAGE technology that was developed at RIKEN as part of the FANTOM project. They examined RNA expression profiles of 225 cancer cell lines and 339 normal cells, and looked for differences in gene expression. They then supplemented this by looking at RNA sequencing data from 4,055 primary tumors and 563 healthy tissues from the Cancer Genome Atlas (TCGA) database, and crossed the two to identify changes that were found in both datasets.

According to Bogumil Kaczkowski of CLST, the first author of the paper, “Using the two different datasets allowed us to make use of the strengths of each. The TCGA data is complicated by the fact that tumor samples are composed of mixture of different cells, while the FANTOM5 CAGE data is from cells grown in cell culture where changes might arise from the culture process. By putting the two together and looking at changes found in both, we have been able to make a robust catalog.”

Based on the work, the researchers were able to identify 128 markers that were consistently perturbed in both datasets in a variety of tumor types. Some of them, such as TOP2A and MKI67, are well-known targets as potential biomarkers. But thanks to the data from FANTOM5, they were also able to find a number of new markers including non-coding RNAs, RNAs derived from repetitive elements and enhancer elements that CAGE technology can identify. In particular, they found that a little known repetitive element called REP522, was upregulated in many cancers.

According to Piero Carninci, one of the leaders of the FANTOM5 consortium and an author of the paper, “The study shows that our CAGE (Cap-Analysis Gene Expression) technology is a powerful tool for cancer marker discovery at the promoter level. We found hundreds of promoters—parts of the genome that initiate expression of a gene—that are upregulated in cancer, and in particular, promoters that overlap with repetitive elements in the genome seem to be upregulated. This is an interesting insight into the development of cancer. We are especially interested in the REP522 element, and would like to determine what role it plays.”

Carninci continues, “It is very rewarding to see that our basic science approach to mapping and understanding regulatory elements of the genome can be translated into discovery that can aid early cancer diagnosis. We hope that researchers will use our findings to identify markers for the many cancer types that currently have no useful markers. It may also be possible to target the genes we have identified as potential drug targets. These targets could potentially help many cancer patients as they are up-regulated in many different types of tumors.” 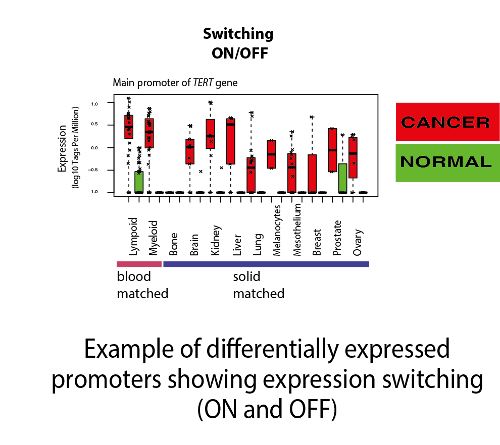 The promoter of TERT, a gene associated with cancer, is overexpressed in tumor cells. The black bars at the bottom indicate there is no expression.