Researchers at the RIKEN Brain Science Institute in Japan have developed a new system for imaging the activity of individual neurons in the marmoset brain. Published in Cell Reports, the study shows how amplifying genetically encoded fluorescent signals with TET-inducible gene expression allows hundreds of individual neurons in the primate brain to be imaged simultaneously over a period of several months.

“Simply adopting the same technique used in mice did not work at all because the fluorescent signal was too weak,” explains lead author Osamu Sadakane. “But, by improving the viral technique, we amplified the signal and succeeded in observing a large group of neurons in the marmoset neocortex.”

Two-photon microscopy is a technique used to image living cells by exciting fluorescent compounds—called fluorophores—with lasers that emit infrared light. When fluorophores are hit by two photons simultaneously, they emit a fluorescent signal. Because neurons use calcium when they transmit signals, neuronal activity can be visualized by genetically attaching fluorophores to calcium indicators—molecules that bind to calcium. Until now, using these genetically encoded calcium indicators—or GECIs—has been successful in small animals such as mice, but has been limited in primates because weak expression levels produced fluorescent signals that were too faint to be seen.

The team succeeded in marmosets by modifying how GCaMP6f—their GECI of choice—was produced in marmoset neurons. Adeno-associated virus (AAV) is often used as a viral vector for introducing transgenes experimentally or for gene therapy. However, rather than simply introducing it into marmoset neurons using a single AAV, the team used two AAVs, amplifying transgene expression and tying it to the presence/absence of the compound doxycycline, which could be added or removed from the monkeys’ drinking water. This allowed the team to express GCaMP6f in very high quantities, which dramatically boosted the fluorescence level and allowed easy visualization that was not possible without their innovation.

“Not only was fluorescence easily to see,” notes Sadakane, “our reversible gene expression system enabled us to image the same neurons over several months.”

Normally, extended expression of AAV transgenes can damage neurons, making long-term imaging studies difficult. By removing doxycycline from the monkeys’ drinking water, the team was able to pause GCaMP6f expression for over a month and prevent neuron damage. They were then able to revisualize the same exact neurons after reintroducing doxycycline into the monkeys’ drinking water.

The new method also allowed visualization at the subcellular level—with activity being detected in axons and individual dendrites—and in cortical layers up to 400 microns from the surface of the brain. This allowed individuals neurons to be imaged in 3-D, which is critical for investigating the organization of cortical circuits.

“The next step is to improve the technique so it can be used with awake, behaving marmosets,” says team leader Tetsuo Yamamori. “Then we will be able to relate neural activity to behavior, and see changes in individual neurons that occur through experience.

“While many people use two-photon microscopy with mice, they cannot study certain complex behaviors shared by primates, including us. With our new method, we will be able to investigate how primate brains work at a level not previously possible.” 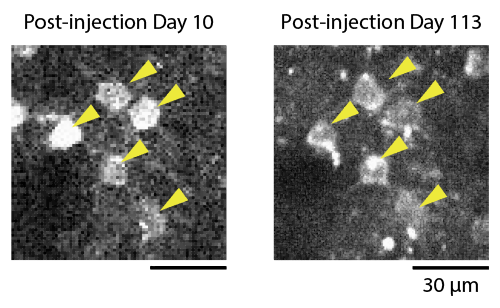 Two-photon calcium imaging of the same neurons after over 100 days.