Liquid acoustics half way to the Earth's core

The most direct information about the interior of the earth comes from measuring how seismic acoustic waves—such as those created by earthquakes—travel through the earth. Those measurements show that 95% of the earth's core is liquid. But, scientists also want to know the composition of the liquid, and that is harder. Now, in research published in Nature Communications, scientists from the Materials Dynamics Laboratory at the RIKEN SPring-8 Center, along with collaborators from the Tokyo Institute of Technology’s Earth-Life Science Institute and other institutes, have succeeded in measuring the speed of sound in mixtures of liquid iron and carbon in extreme conditions, allowing limits to be set on the core composition.

According to Alfred Baron, head of the Materials Dynamics Laboratory, “Understanding the composition of the liquid within the earth's core is an important question, as it can give us clues about how the earth was formed.” It is known that the liquid in the core is mostly molten iron, but it has a density about 10% too small to be only iron, and geoscientists are trying to determine what elements are mixed with the iron to reduce its density.

Worldwide, researchers are now creating a "catalogue" that matches sound velocities with material composition and temperature. However, the temperatures of materials inside the earth range up to several thousand degrees (greater than 5,000 K) and the pressures reach several million atmospheres, so measurements are difficult. Thus the "catalogue" has grown very slowly, with each point requiring man-years of work. Also, even though 95% of the earth's core is liquid, almost all the measurements so far have been of solids because they are easier to handle.

With the current work, the researchers succeeded in extending the catalogue to include the first liquid measurements taken at very high pressure. Using a combination of diamond anvil cell technology—where a sample is squeezed between two diamonds—laser heating, and a large inelastic scattering spectrometer at SPring-8, weighing more than 20 tons, they were able to measure the sound velocity of liquid iron-carbon mixtures at very high temperatures and pressures. While the values they achieved were only about half that of the outermost part of the liquid core—where the pressure is about 1.3 million atmospheres, and the temperature about 4,000 K—they were able to extrapolate to core conditions from the measurements.

According to first author of the study, Yoichi Nakajima, “The extrapolation gives us important insights, suggesting that at most only about 1.2% of the core, by weight, is carbon. Thus while there may be, and, in fact, probably is, some carbon in the core, there must also be some other light elements, such as silicon, oxygen, sulfur or hydrogen." Says Baron, "While already leading the world in our ability to measure velocities like this under extreme conditions, we will continue to work with different materials and even more extreme conditions at a new RIKEN facility, the Quantum NanoDynamics Beamline, BL43LXU, at SPring-8". 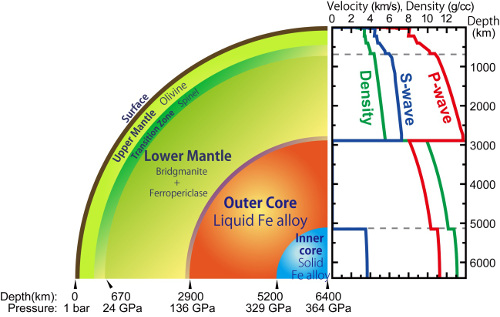 The interior of the Earth and sound velocity and density profiles 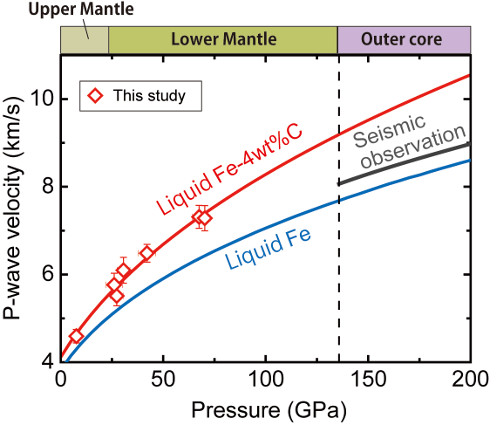 The present results of P-wave velocities in liquid Fe-C alloy are compared with that of liquid Fe and seismological observations.