You may have wondered why some people seem to need less sleep. Is it in their genes? It turns out that it likely is. A number of so called short-sleeper genes, which are associated with little need for sleep, have recently been identified through years of arduous research and serendipity.

Now, researchers at the RIKEN Quantitative Biology Center (QBiC) have advanced sleep genetics research by developing a new method for monitoring mouse sleep cycles. The Snappy Sleep Stager is a non-invasive, automated sleep cycle monitoring system based on mouse respiration, or breathing. Compared with other monitoring systems that require surgical implants or many hours of human intervention the Snappy Sleep Stager is simple to operate and allows more mice to be studied during one experiment. By combining it with a new system for developing nearly perfect knock-out mice, they have identified a new short-sleeper gene, Nr3a.

“The problem with sleep studies is that they are technically difficult and expensive, which limits the number of mice that can be studied,” says Hiroki Ueda of RIKEN QBiC, who led the research published in Cell Reports.

The low cost and ease of use of the Snappy Sleep Stager allowed the researchers to accurately test a new mouse genetic modification system, the next-generation triple CRISPR method. “The major advance of our method is the efficiency,” says Kenta Sumiyama, a co-first author from RIKEN QBiC. “Our goal was more than 90% efficiency and we achieved that. Now our goal is to be able to completely knock out any gene we want.”

The efficiency benefits the mice too, Sumiyama continues, “The new system allows us to directly analyze phenotypes without making more than one generation of mice. There is a huge difference in the number of mice used. Perhaps ten times fewer mice are needed” to get a so call bi-allelic knockout mouse. These mice, missing both copies of a gene that was “knocked out,” can provide a deeper understanding of the missing gene.

Sumiyama says he was not surprised at the improved efficiency and that the research went quite smoothly but he admits the greater challenge is high efficiency “knock in” animals, saying, “Insertion of a gene is much more difficult than removing it.”

According to Sumiyama, “You can target any disease caused by a genetic mutation” with the triple CRISPR method. In the current research the scientists found that the Nr3a gene, a member of the NMDA receptor family, is a short-sleeper gene. “The implications are wide ranging,” says Genshiro A. Sunagawa of the RIKEN Center for Developmental Biology, a first author of the paper. “As the NMDA receptor is associated with schizophrenia, Alzheimer’s disease and depression, all of which are known to involve sleep disturbances.”

In addition to these disorders, sleep cycle disturbances are known to be associated with many health issues. Sunagawa says, “It was known that sleep can be staged by monitoring respiration,” but existing technology for monitoring sleep stages typically requires direct manipulation of the subject or a very small chamber to monitor breathing.

“The beauty of the SSS is that can be used in a larger enclosure which allows a mouse to live a normal life span. With our system changes in sleep could be observed as a mouse ages. This is a big advantage over other systems,” says Sunagawa. He continues, “It could even be applied to monitoring babies or sleepy drivers in cars. These would be good applications.” “SSS can also be used in combination with MRI which is another big advantage over other systems.” Sunagawa concludes, “We have not optimized the system to detect REM sleep but it is something along with MRI studies that we are working on now.” 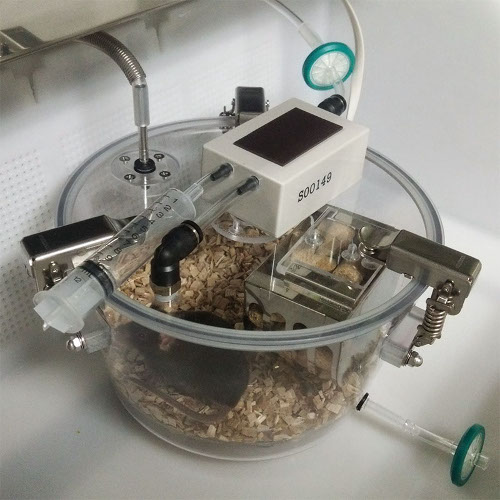