Researchers at the RIKEN Center for Developmental Biology (CDB) in Japan have developed a way to obtain super-resolution 3-D images of delicate structures deep in the brain. Published in Cell Reports, the work describes a new process for making brain tissue transparent that outperforms other methods and allows extremely detailed imaging of tiny but important structures within neurons.

Many aspects of learning and behavior are accompanied by structural changes in neurons at the synapse — the place where neurons communicate with each other by sending and receiving neurotransmitters like dopamine, serotonin, and glutamate. Being able to see these kinds of structural changes in 3-D will help us understand what normal changes look like, and allow us to identify differences that occur in abnormal situations.

Fluorescence microscopes are very useful for this because fluorescent proteins are often used to trace neurons that originate from a specific brain region or to label specific structures of interest — like synapses of a neuron. One important issue is that in order to create accurate 3D images of deep tissue in the brain, the brain needs to be transparent.

In recent years, several methods have been developed for making tissue transparent, a process called optical clearing. Two problems that plague the development of these agents for high-resolution microscopy are tissue damage and spherical aberrations that create inaccurate images. To date, clearing methods have been useful for imaging large structures at low resolutions, but tissue damage through harsh chemicals or swelling make them impractical for imaging fine structures on neurons, such as dendritic spines or axonal boutons.

Building off their previous success with the clearing agent SeeDB (See Deep Brain), the CDB group led by Takeshi Imai has developed a new recipe, called SeeDB2, which additionally minimizes the disruptive spherical aberrations, maintains fine structures without damage, and allows bright and stable fluorophores — the chemical compounds that re-emit light when excited and allow for fluorescent imaging.

Substances like water and oil make light slow down and bend different amounts, which is quantified as their refractive indexes. In order to clear tissue without inducing light scattering and spherical aberrations, the team hit upon a strategy to match the refractive index of the clearing agent to that of the tissue samples. A special recipe of iohexol and saponin, buffered in Tris-EDTA, matched the refractive index of samples used in objective-lens high-resolution imaging using oil immersion, and proved to effectively clear and maintain samples without introducing any morphological damage.

“While the degree of transparency obtained using SeeDB2 is less than what can be achieved with other optical clearing agents,” notes Imai, “only SeeDB2 can be used to obtain super-resolution images of fine neuronal structures. Researchers must therefore choose the clearing agent that best fits their experimental purpose.”

Using SeeDB2, the team was able to obtain super-resolution images of neural circuitry 10 times deeper in the brain than was possible in the past, and showed that their approach was compatible with several different types of super-resolution microscopy.

As many cognitive-related disorders are associated with synaptic abnormalities, as a way to showcase what can be accomplished with their new recipe, the group focused on imaging the dendrites of normal neurons and those in which an important subunit of an excitatory glutamate receptor had been knocked-out. They were able to see that the size of spines was larger and that inhibitory synapses accumulated in the enlarged spines of the mutant neurons.

Notes Imai, “Finding that changes in an excitatory receptor affected fine structures at inhibitory synapses is an important discovery that was made possible by our new optical clearing formula. We expect that super-resolution imaging of deep tissue neural circuitry will continue to be a powerful strategy for studying connectomics at the synaptic level, and that SeeDB2 will have an important role in making these studies possible."

Fine morphology and fluorophores are preserved in SeeDB2 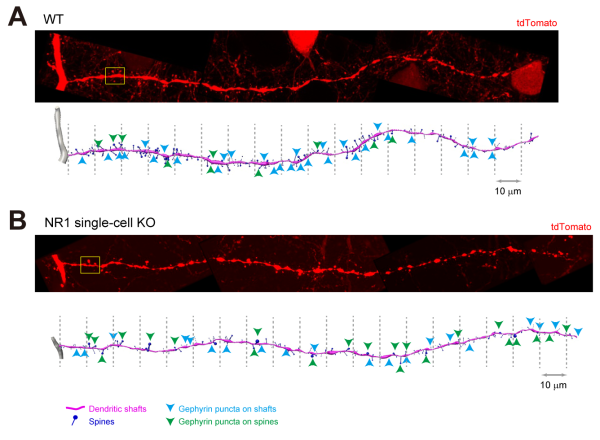 Quantitative analyses of synapses in wild-type and NMDAR-deficient neurons

L5 neurons were labeled with cytoplasmic tdTomato and EYFP-gephyrin using in utero electroporation and analyzed at P22 (Airyscan). Unbranched oblique dendrites (100–200 μm long) extending from the trunk of the proximal part of the apical dendrites from L5 pyramidal neurons were analyzed. Representative super-resolution images are reconstructed with VAST. Note that gephryin puncta on the dendrite shaft vs. spines are unambiguously defined. Both wild type (A) and NR1-deficient neurons (B) were analyzed.