Light stimulation of brain cells can recover memories in mice with Alzheimer's disease-like memory loss, according to new research from the RIKEN-MIT Center for Neural Circuit Genetics. The rescue of memories, which changed both the structure of neurons as well as the behavior of mice, was achieved using optogenetics, a method for manipulating genetically tagged cells with precise bursts of light. This finding suggests that impaired retrieval of memories, rather than poor storage or encoding, may underlie this prominent symptom of early Alzheimer's disease and points to the synaptic connectivity between memory cells as being crucial for retrieval.

Loss of long-term memory for specific learned experiences is a hallmark of early Alzheimer's disease (AD) that is also exhibited by mice genetically engineered to develop AD-like symptoms. Building on their previous work on Nature and Science that identified and activated memory cells, a group led by RIKEN Brain Science Institute and RIKEN-MIT Center Director Susumu Tonegawa has now shown that spines — small knobs on brain-cell dendrites through which synaptic connections are formed — are essential for memory retrieval in these AD mice. Moreover, fiber-optic light stimulation can re-grow lost spines and help mice remember a previous experience. The work was published in Nature on March 16.

Mouse memory is often inferred from learned behavior, in this case associating an unpleasant footshock with a particular cage. Remembering and expecting shocks causes mice to freeze in this enclosure but not in a neutral one. Compared with normal mice, AD mice exhibited amnesia and reduced freezing behavior, indicating progressive memory loss.

The engrams, or memory traces, of this particular experience are known to be located in the dentate gyrus of the hippocampus, a key brain area for memory processing. During fear conditioning, researchers used a virus to deliver a gene into the dentate gyrus, which labeled active engram cells. This allowed researchers to visually identify the neurons that made up the engram for that specific fear memory. A second virus contained a gene making only these engram neurons sensitive to light. When the engram cells were reactivated with light in the AD mice, memory of the footshock experience became retrievable and freezing behavior was restored.

Memories restored with this method faded away within a day, and the researchers next sought to understand why this happens. They noted a reduction in the number of spines as the mice aged and their Alzheimer's disease progressed. Their waning memory for the fear training was also linked to a loss of these spines. Previous work had shown that spines grow when neurons undergo long-term potentiation, a persistent strengthening of synaptic connectivity that happens naturally in the brain but can also be artificially induced through stimulation.

Through repeated stimulation with high-frequency bursts of light to the hippocampal memory circuit in AD mice, the team was able to boost the number of spines to levels indistinguishable from those in control mice. The freezing behavior in the trained task also returned and remained for up to six days. The implication is that restoring lost spines in the hippocampal circuit facilitated retrieval of the specific fear experience and its associated freezing behavior. “We have shown for the first time that increasing synaptic connectivity within engram cell circuits can be used to treat memory loss in mouse models of early Alzheimer’s disease,” says lead author Dheeraj Roy.

“The successful retrieval of memories in AD mice by increasing the number of spines for normal memory processing onlyin the memory cells, rather than in a broad population of cells, highlights the importance of highly-targeted manipulation of neurons and their circuits for future therapies. This level of specificity has not yet been accomplished in current deep brain stimulation therapies,” says Tonegawa. 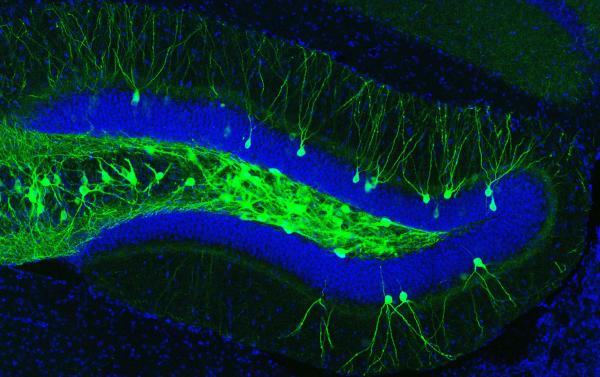 Engram cells in the dentate gyrus of an AD mouse

This image represents a coronal section of hippocampal dentate gyrus (DG) from a mouse model of early Alzheimer’s disease. These AD mice lack β-amyloid plaques at 7-months of age. Using these mice combined with a novel viral strategy, memory engram cells (green) for a contextual fear memory were labeled with a light-sensitive protein ChR2. 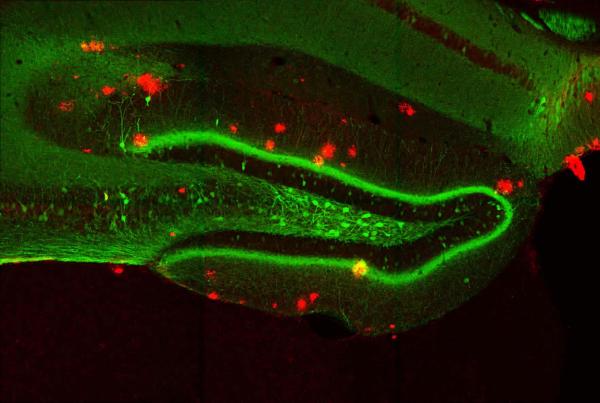 This image represents a coronal section of hippocampal dentate gyrus (DG) from a mouse model of early Alzheimer’s disease. These AD mice exhibit severe β-amyloid plaques (red) in the DG at 9-months of age. Using these mice combined with a novel viral strategy, memory engram cells (green) for a contextual fear memory were labeled. 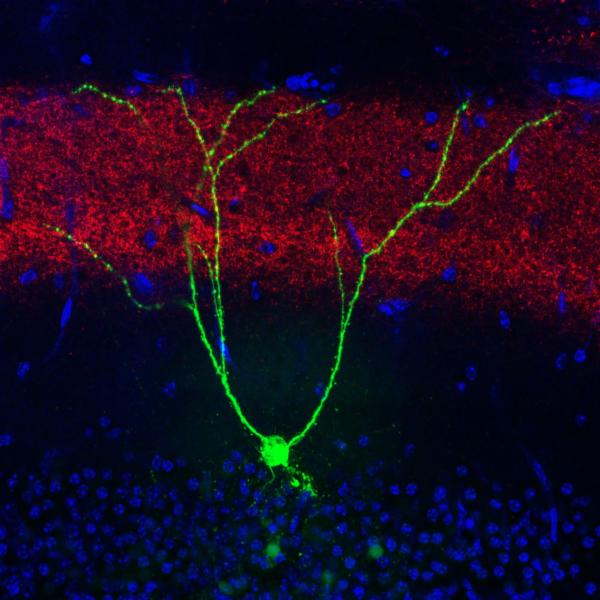 This image depicts a single memory engram cell (green) in the hippocampal dentate gyrus (DG) region of a mouse model of early Alzheimer’s disease. To optically manipulate specific connections to these engram cells, a blue light-sensitive protein oChIEF was expressed in an upstream brain region, i.e., medial entorhinal cortical inputs (red) to the DG. The majority of DG granule cells were not active during engram labeling (blue, non-engram cells).