Fights are won and lost in the brain

Researchers at the RIKEN Brain Science Institute in Japan have found that a deep-brain structure called the habenula contains two neural circuits that work in a complex interplay to influence whether a fight will be a win or loss.

In humans and other social animals, fighting is an important mode of maintaining a group's social structure. The question of how such aggression is regulated can now be answered, at least for a certain kind of fish, and the key is not brawn, but the brain. Researchers at the RIKEN Brain Science Institute in Japan have found that a deep-brain structure called the habenula contains two neural circuits that work in a complex interplay to influence whether a fight will be a win or loss.

The circuits, which originate in the habenula and pass through the interpeduncular nucleus (IPN), terminate in the dorsal tegmental area. This part of the fish brain is thought to correspond to a region in mammals called the periaqueductal gray that regulates fight and flight behaviors. The proximity and possible homology of these brain areas inspired an investigation into whether the habenula is also involved in freezing, fleeing, and fighting behaviors. The results, published April 1 in Science, establish that two sub-regions of the dorsal habenula (dHb) antagonistically regulate the outcome of zebrafish fights, with activity in the lateral and medial parts associated with surrender or continuing aggression, respectively. To probe the circuits, the team led by Hitoshi Okamoto documented the signaling, circling, biting, and surrender behaviors in zebrafish clashes for dominance.

They then measured the local field potentials―the summed electric current from a small group of neurons―in the IPN of winning and losing fish in vivo. When sub-regions in the upstream dHb were electrically stimulated, activity in the dorsal (dIPN), but not ventral IPN, was reduced in loser fish. This result was also corroborated by fluorescence signals linked to neural activity in brain slices, which showed that a loser state is associated with reduced signaling from the lateral sub-region of the dorsal habenula (dHbL) to the dIPN. Instead, the signal from the medial subregion of the dorsal habenula (dHbM) to the ventral IPN (vIPN) was enhanced. The signal in the loser ultimately spread to the median raphe (MR). In both in vivo and slice experiments, activity levels were not significantly different between winner, loser, and naive (non-fighting) fish in the other circuit (medial sub-region of dHb to ventral IPN). According to lead author Ming-Yi Chou, the IPN weighs the habenular inputs, essentially acting like a calculator of the outcome of the fight behavior.

Transgenic fish, in which these circuits were selectively silenced with a nerve toxin, provided definitive evidence. Without activity in the dHbL to dIPN circuit, fish were much more likely to lose a fight. By contrast, silencing dHbM activity disposed the fish to win their fights. These transgenic fish were not developmentally or physically different from their wildtype counterparts, so the implication is that transmission in the habenula-IPN circuits is decisive to the fight outcome. "We think the activity in the habenular circuits may be dynamic during the fight, with competition between the lateral and medial sub-regions," explains Okamoto. "When a threshold in activity is reached, it may push the fish into a winner or loser state, either continuing the aggression, or surrendering."

These transgenic fish also didn't retain the outcomes of their previous fights in a normal way, unlike wildtype fish that exhibit a greater likelihood of winning based on a previous win. The few dHbL-silenced fish that had been victorious in a previous fight did not exhibit this winner effect. "These fish easily gave up even if they started in a dominant role, and vice versa for the dHbM-silenced fish: they didn't give up even if they started in an inferior position," says Okamoto. The normal experience effects that would pre-dispose fish to win or lose were thus mitigated in these transgenic fish that lacked normal habenular winning or losing signals.

An additional finding was that loser fish with reduced activity from the ventral habenula (vHb) to the median raphe nucleus (MR) didn't behave like losers, prompting continued attacks from the opponent fish. The Okamoto group had previously found this neural pathway in zebrafish to be essential for learning how to avoid danger in the presence of threat signals.

The lack of proper avoidance behaviors in the loser fish may be due to downstream areas that receive projections from the habenula. The dorsal and median raphe, which receive input from the IPN, are also thought to act antagonistically, affecting stress resilience in animals. Interneurons within IPN may also be competing with each other. “These same circuits exist in all vertebrates, including humans, with possibly the same bistable mechanism,” said Okamoto. Devising an equation to describe the activity and its bifurcation into winner and loser states would allow the prediction of fight outcomes purely from neural data.

YouTube movie: The fish show displaying, circling, biting, and the determination of the winner and loser. 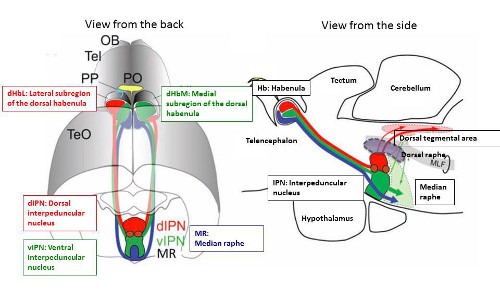 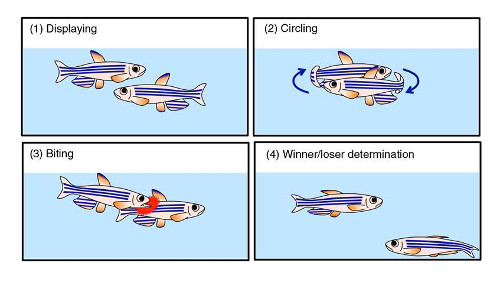 Fig. 3. Change in the propagation of nerve excitation from the habenula in a naïve (a), winner (b), and loser (c) fish.

The red areas indicate the propagation pathways of nerve excitation from the habenula (Hb).