Researchers at the RIKEN Brain Science Institute in Japan have discovered a protein complex that helps direct the growth of axons -- the parts of neurons that make up our nerves, connecting our senses and muscles to the brain and spinal cord. Published in Cell Reports, the study shows how the protein myosin-Va acts as a calcium sensor that tells new pieces of axon where they should go.

When the nervous system is developing, neurons send their axons out to make connections with other neurons. For instance, a neuron in the dorsal spinal cord grows towards attractive signals coming from the ventral spinal cord and cross the midline. The front ends of growing axons have "growth cones" that sniff out attractive and repulsive signals. If an attractive signal is on the left, new pieces of axon membrane are inserted into the left side of the growth cone, which makes the axon grow towards the attractive signal.

Until now, while scientists knew that attractive signals trigger calcium ions to be released from storage inside the growth cone, they did not know how that causes new pieces of axon to get put into the correct part of the growth cone. "With these experiments," notes group leader Hiroyuki Kamiguchi, "we have discovered that myosin-Va is the missing link between Ca

Their search for the missing link began with two receptors for calcium that is released from the endoplasmic reticulum of growth cones. The two receptors -- RyR3 and IP3R --are each associated with a different kind of calcium release from the endoplasmic reticulum, and with axon growth toward attractive signals. Kamiguchi explains, "we hypothesized that in both cases, calcium is being detected by the same sensor, triggering export of membrane vesicles to one side of the growth cone."

To find out what the common calcium sensor is, the team examined the structures of the two receptors, looking for matching regions. They found one region that is very similar between the two receptors. Then they conducted experiments to determine what proteins can bind there, and discovered that the protein myosin-Va interacts with the site on both receptors.

To test if myosin-Va is needed for axon growth to attractive signals, they injected in vitroneurons with peptides made from the myosin-Va binding region. Myosin-Va all over the growth cone then bound to these peptides instead of the Ry3 and IP3 receptors, and axons were actually repulsed from attractive signals.

The team then looked at how myosin-Va is involved in transporting membrane vesicles to the growth cone. To do so, they fluorescently labeled VAMP2 -- a molecule found in the vesicles -- and observed what happened when myosin-Va was prevented from binding to the receptors. They found that vesicles export increased all over, preventing growth from proceeding in the correct direction.

The group then used focal laser-induced photolysis to test whether axons could be directed to grow in particular directions without needing calcium. They created inert "caged" versions of the competitive peptide, and injected them into the cells. UV light was then shined very precisely to one side of the growth cone, destroying the "cages" on that side, and releasing the peptides. The result was that myosin-Va became unbound only on one side of the growth cone, and the axon began to grow on that side.

Kamiguchi recognizes the power of this experimental technique. "Our peptides prevented axons from crossing the spinal cord midline

Response to FLIP of caged calcium

Time-lapse differential interference contrast (DIC) images of chick dorsal root ganglion growth cones. Attractive Ca2+ signals were generated by FLIP of caged Ca2+ at red spots. (left panels) A control axon grows toward the left when caged calcium is released on the left side of the growth cone. (right panels) After injecting the RIHCR peptide, an axon fails to grow towards the left, despite the release of caged calcium on that side. Time in minutes after the onset of repetitive FLIP (3 s interval) is shown. The scale bar represents 10 mm. FLIP: focal laser-induced photolysis; RIHCR: RyR and IP3R Highly Conserved Region. 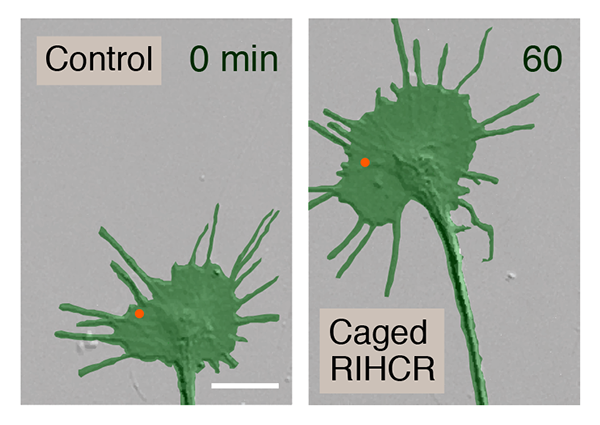 Response to FLIP of caged RIHCR