Every day humans and animals face ambiguous circumstances. If we become sick after eating, we blame the food; however, if we then fall ill without having eaten that food, the causal link becomes ambiguous. New findings from the RIKEN Brain Science Institute in Japan and New York University reveal where and how such ambiguous associations are processed in the brains of rats.

Learning how to predict dangerous relationships in the environment — such as between odors and food, lightning and thunder, or sounds and predators — is essential for survival. While we know much about how experiences become linked with unpleasant outcomes when the associations are clear, how these links are updated in the brain when the relationships are ambiguous was unknown. In a new study published in Nature Neuroscience on May 23, scientists report that ambiguity in these types of associations can be observed in rats that had previously learned a tone-shock association and were then given shocks without the tone. In the brain, they found traces of both the memory and its associated uncertainty stored in neural circuits of a central brain area called the amygdala.

When given shocks after hearing a tone, rats who have learned the association normally freeze, anticipating the shock. However, when the same animals learned that shocks could also arrive without a tone, they showed less anticipatory freezing because the causal link between tone and shock was not clear. In the brain, this uncertainty was reflected in reduced strength of neural connections between the auditory system (where tones are processed) and the amygdala, a brain region critical for storing unpleasant memories.  Strong connections that formed after learning the tone-shock association were reversible if the relationship later became ambiguous.

By manipulating brain activity during learning with optogenetics — a technique to control brain cell activity with bursts of light — the researchers showed that specific neurons in the amygdala were responsible for enabling the uncertainty. When those neurons were silenced as animals experienced shocks without a preceding tone, surprisingly, rather than acting unsure and freezing less often, the animals always acted as if they expected to be shocked when they heard the tone. This indicated that the amygdala not only stores unpleasant memories, but also plays an active role in an animal’s evaluation of the associated level of ambiguity.

The authors also mathematically analyzed how rats responded when different patterns of lights, tones, and shocks unfolded in their environment under ambiguous conditions. A longstanding theory suggested that different sensory cues in the environment compete for association with outcomes such as food or threats resulting in one association winning out. Contradicting this theory, the authors found that the way rats evaluate ambiguity can be best described with a dynamic model that considers several different configurations of how tones, lights or other features of the environment might interact during learning.

Tamas Madarasz, the lead author of the study now based at the University of Geneva, explained: “To make successful predictions the brain needs to consider different models of what these configurations could be, and perform computations in parallel using each of the possible models of the environment and the associated uncertainty. This leads to a distributed neural representation for each association. This approach has helped inspire better learning algorithms for computers, and it looks like animals are using this strategy too.” The authors suggest that humans may also evaluate their environment and its events using a statistical approach that computes the probabilities of associations to estimate ambiguity.

“We believe we’ve discovered a new framework for the amygdala and how its neurons process ambiguous associations,” said senior author Joshua Johansen of BSI. “Our results are important for understanding how memories and associations are formed and modified.” The findings may also have implications for understanding diseases involving ambiguous associations such as anxiety, and in the design of more flexible computer architectures. 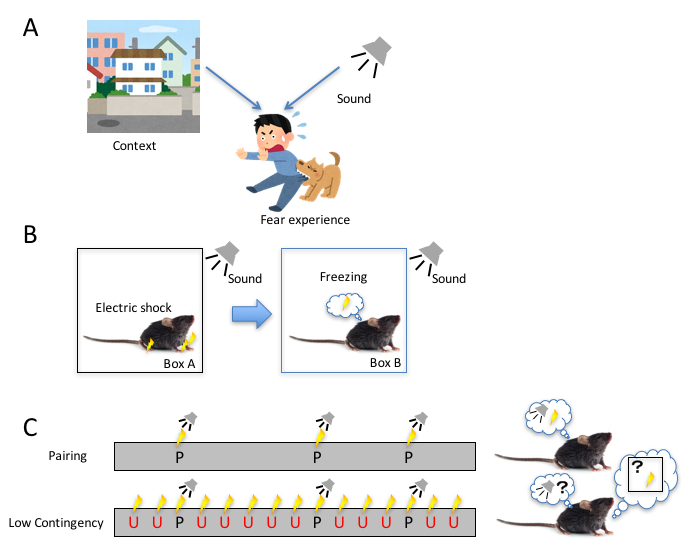