Black carbon aerosols—particles of carbon that rise into the atmosphere when biomass, agricultural waste, and fossil fuels are burned in an incomplete way—are important for understanding climate change, as they absorb sunlight, leading to higher atmospheric temperatures, and can also coat Arctic snow with a darker layer, reducing its reflectivity and leading to increased melting. Unfortunately, current simulation models, which combine global climate models with aerosol transport models, consistently underestimate the amount of these aerosols in the Arctic compared to actual measurements during the spring and winter seasons, making it difficult to accurately assess the impact of these substances on the climate.

To find out if these inaccuracies could be mitigated, a team of scientists decided to use the Japanese K computer to perform fine-grained simulations of how black carbon aerosols are transported to and distributed in the Arctic region. By using smaller grids—with spacing of just a few kilometers rather than several tens of kilometers as in conventional current models—they were able to show that they could more realistically model the amount of black carbon aerosols, mitigating the underestimation in more coarse-grained models. Their finest model used 3.5 kilometer grids broken up vertically into 38 layers, so that it required 1.6 billion grids to cover the globe. The simulation, done on the 10-petaflop K computer, still required 17 hours to perform the two week simulation.

According to Yousuke Sato of the RIKEN Advanced Institute for Computational Science (AICS), “this research shows that powerful supercomputers, by performing more fine-grained simulations, can help us to model weather and climate patterns in a more realistic way. We have to note, however, that while our model reduced the underestimation, it did not completely eliminate it. Further generations of even more powerful computers will allow us to run simulations that may be able to make even more realistic simulations and help us to understand the mechanism through which these aerosols are transported.”

“It is also known,” continues Sato, “that current models do not realistically model the vertical distribution of the aerosols, and we believe that finer measurements could help there as well. Unfortunately there were no vertical measurements taken in November 2011, the time we chose to model, so we plan in the future to do simulations for time periods for which actual measurement data exist.”

The research, published in Scientific Reports, was carried out by AICS in collaboration with the University of Tokyo, the National Institute of Environmental Studies, Kyushu University, and the Japan Aerospace Exploration Agency. 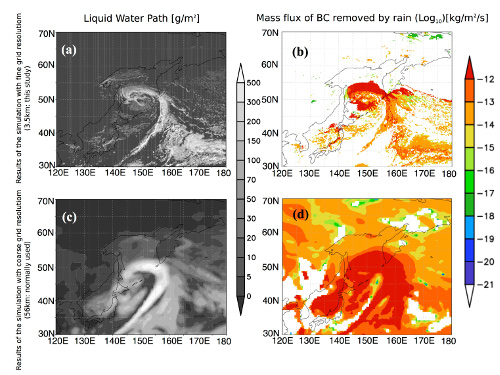 (a) An example of frontal systems and lows visualized by a vertically accumulated mass of liquid water (liquid water path: LWP) and (b) wet deposition flux of black carbon aerosol simulated with 3.5-km grid spacing.
(c) and (d) are the same as (a) and (b), respectively, but simulated with 56 km grid resolution. The contrast between the cloud and cloud-free area is clearly found in the result with 3.5-km spacing (a), and the black carbon aerosol removed by wet deposition process is reduced in the result of the 3.5-km grid spacing (b). 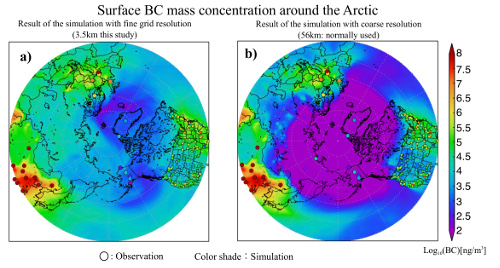