It is not surprising that a good night’s sleep improves our ability to remember what we learned during the day. Now, researchers at the RIKEN Brain Science Institute in Japan have discovered a brain circuit that governs how certain memories are consolidated in the brain during sleep. Published in the May 26 issue of Science magazine, the study shows how experimentally manipulating the identified neural connection during non-REM sleep (deep sleep) can prevent or enhance memory retention in mice.

The team led by Masanori Murayama studied the long-known phenomenon of memory consolidation during sleep by building off their recent study on tactile perception in which they found that perceiving texture requires signaling within a neural circuit from higher-level motor-related brain regions back to lower-level touch-related sensory areas. They reasoned that the same “top-down” pathway might also consolidate memories of textures. Explains Murayama, “There is a long standing hypothesis that top-down input is crucial for memory consolidation and that during sleep, neurons in sensory regions activated during the initial experience can “reactivate” by unknown pathways. We found such reactivation of the top-down pathway is critical for mice to encode memories of their tactile experiences.”

The researchers developed a task to assess memory retention that relies on the natural inclination of mice to spend more time investigating new items in their environment. First they allowed mice to explore objects in two rooms with smooth floors, then they changed one of the smooth floors to a textured floor and again allowed the mice to explore. With normal sleep, mice spent more time exploring the room with the textured floor, showing that they remembered the smooth room and were less interested in it. Typically, this behavior was observed as long as the second exploration occurred within two days.

To examine whether the top down circuit was responsible for memory consolidation during sleep, they manipulated the mice in several ways. First, they showed that sleep deprivation immediately following the first tactile experience caused mice to explore the textured room less often on the second exploration, indicating that they did not remember the smooth room. Next, they inactivated the top-down neural pathway during non-REM sleep shortly after the first exploration and found that during the second exploration, mice performed as if they had been sleep deprived. Silencing the top-down pathway when mice were awake or during non-REM sleep at later times had no effect on performance, indicating that memory consolidation happened in the first bout of non-REM sleep after the experience.

“Our findings on sleep deprivation are particularly interesting from a clinical perspective,” says Murayama. “Patients who suffer from sleep disorders often have impaired memory functions. Our findings suggest a route to therapy using transcortical magnetic or direct-current stimulation to top down cortical pathways  to reactivate sleep-deprived neurons during non-REM sleep. Our next step is to test this in mouse models of sleep-disorders." 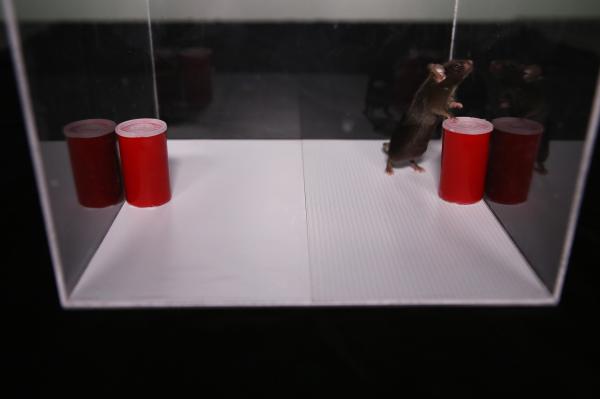 A mouse explores the object located in the textured side of the room during the test-phase of the task. Overall, well-rested mice spent more time doing this than exploring the object on the smooth side of the room, indicating that they remembered the smooth-floor experience from the sampling phase of the task. In contrast, the behavior of sleep deprived mice and those who had the top-down pathway inhibited did not indicate that they remembered the smooth-floor experience. 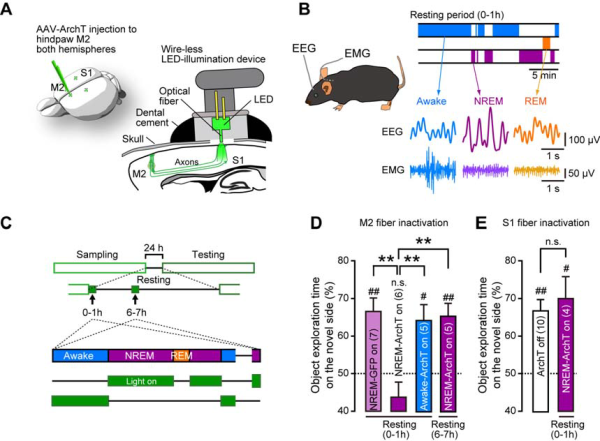 (A) Diagram of the miniature wireless LED device that was attached to S1 (or M2) in both hemispheres. AAV-ArchT or AAV-GFP was injected (inset) into M2 (or S1) in both hemispheres. (B) Examples of EEG and EMG recordings during the resting period. Brain states were identified with EEG recordings (see Methods). (C)Diagram of sleep-state specific optogenetics. (D) Summary for the task when M2 fibers were inactivated at S1 during the three periods. (E) Summary for the task when S1 fibers were inactivated at M2 during resting-NREM sleep (0-1h after sampling period). The cumulative illumination time was 30 min in each state. Statistical significance among more than 2 groups (**P< 0.01) was assessed by one-way ANOVA with Tukey’s post-hoc test, statistical significance between 2 groups was assessed by Student’s t-test, statistical significance from 50 % chance level (#P < 0.05, ##P < 0.01) was assessed by one-sample t-test.