Just as members of an orchestra need a conductor to stay on tempo, neurons in the brain need well-timed waves of activity to organize memories across time. In the hippocampus—the brain's memory center—temporal ordering of the neural code is important for building a mental map of where you've been, where you are, and where you are going. Published on May 30 in Nature Neuroscience, research from the RIKEN Brain Science Institute in Japan has pinpointed how the neurons that represent space in mice stay in time.

As a mouse navigates its environment, the central hippocampal area called CA1 relies on rhythmic waves of neural input from nearby brain regions to produce an updated map of space. When researchers turned off the input from nearby hippocampal area CA3, the refreshed maps became jumbled. While mice could still do a simple navigation task, and signals from single neurons appeared to represent space accurately, the population level code, or 'orchestra' was out of time and contained errors. "The neural music didn't change," said senior author Thomas McHugh, "but by silencing CA3 input to CA1 in the hippocampus we got rid of the conductor."

McHugh and co-author Steven Middleton accomplished this by genetically engineering mice to express a nerve toxin in CA3 that shut down the synaptic junctions between CA3 and other brain areas. The overall neuronal activity was preserved, but with synaptic communication effectively muted, they could measure the impact of removing CA3 input on the space map in area CA1.

While mice ran up and down a track, the authors recorded multiple individual neurons as well as the summed electric current from a larger group of neurons, called local field potentials. This allowed them to monitor each theta cycle, the time period over which the hippocampus updates its neural map of space as the mouse moves.

Comparing the individual and population activity in normal and transgenic mice, they made an apparently paradoxical observation. As the transgenic mice moved in the enclosure, individual neurons continued to update their activity at a regular interval of 8 Hz, known as theta-cycle phase precession. This cyclic organization of information, however, was absent across the population of neurons. "Without input from CA3, there was no global organization of the neural signals across the theta cycle to define where the mouse came from or where it was going," said McHugh.

The discovery of the mental map of space in the hippocampus was awarded the 2014 Nobel Prize in Physiology or Medicine, but the circuitry connecting ensembles of place cells, which are also used for memory processing, and how they update in realtime was not known. Without CA3 input, accurate prediction of the spatial location from the ensemble neural code is impaired. The mouse still knows where it is, but small errors in representing space from individual neurons become compounded without CA3 directing the CA1 ensemble. "If neurons don't activate in sequence, you can't organize memories across time," says McHugh. "Whether in mice or humans, you need temporal organization to get from here to there, to make decisions and reach goals." If shutdown of CA3 was possible in humans, McHugh suggests, memories would likely become useless and jumbled. Earlier work with these same mice pointed to a similar role for the CA3 neurons in organizing information during sleep, a process required for long-term memory storage.

While individual hippocampal neurons continue to tick, this study shows that the neural orchestra needs CA3 input to serve as a conductor. This means that different neural coding strategies are dissociated but interdependent in the brain. Perhaps more importantly, the authors observed a decrease in neural oscillations characteristic of CA3-to-CA1 communication. Disruptions to these oscillations have been identified in diseases ranging from schizophrenia to Alzheimer’s and a deeper understanding of how the rhythms of the brain organize information may shed light on the circuit mechanisms of these disorders. 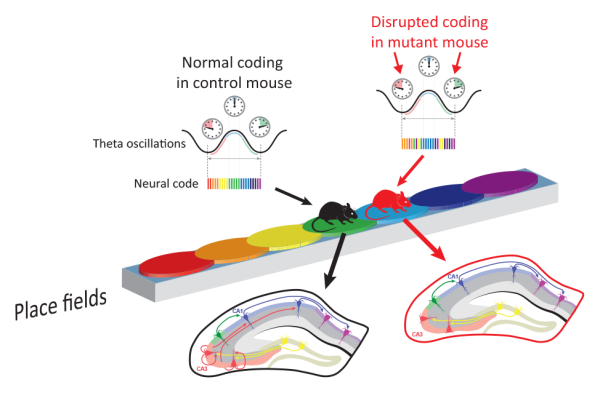 Schematic of normal and erroneous place coding over time

As control mice run along a track, the brain map of their environment is regularly updated through the neural circuitry in the hippocampus (left side of image). Without input from area CA3 in the hippocampus, the neural code that represents where the mutant mouse has come from (past coding) and is going (future coding) becomes disordered with only the current location remaining intact (right side of image).