Where do rubber trees get their rubber?

Researchers at the RIKEN Center for Sustainable Resource Science (CSRS) in Japan along with collaborators at Universiti Sains Malaysia (USM) have succeeded in decoding the genome sequence for Hevea brasiliensis, the natural rubber tree native to Brazil. Published in Scientific Reports, the study reports a draft genome sequence that covers more than 93% of expressed genes, and pinpoints regions specific to the biosynthesis of rubber.

Natural rubber flows in latex ducts and protects plants from insects when the plant becomes injured. For humans, it is an important resource for many industrial applications because it has several useful properties that have not been reproducible in synthetic petroleum-based rubber. While some strains of rubber tree yield higher amounts of rubber than others, the reasons for this are still unknown. The team led by Minami Matsui at the RIKEN CSRS and Alexander Chong at USM set out to sequence and analyze the H. brasiliensis genome. Explains first author Nyok Sean Lau, “genomic information can reveal which genes contribute to the rubber tree’s capacity to produce high amounts of latex. This in turn will help us develop rubber trees with higher yields.”

The team looked for genes related to rubber itself and for resisting disease — two factors that affect rubber production. They found that the two most abundant proteins that make up rubber — Rubber Elongation Factor and Small Rubber Particle — are encoded on a large number of genes that are clustered together in a small region of the genome. While other tropical plants also express these proteins to some extent, being encoded more than eight times on different genes is unique to H. brasiliensis. Cap analysis gene expression (CAGE) — a method developed at RIKEN — revealed that expression of these proteins is tissue specific, with expression more that 100 times greater in latex than in leaves.

The team also found that compared to other members of the Euphobiaceae family, the rubber tree has many more genes related to disease resistance, and that these genes also formed clusters within the genome. “The high latex production found in the rubber tree,” theorizes Matsui, “may be caused by a coordinated expression of these genes combined with increased gene number due to gene duplication.”

"This finding will help improve latex production, a vital industrial crop in Malaysia,” notes Chong. “For USM, we hope to continue working with RIKEN and relevant industrial partners to utilize knowledge from genome for better production of rubber."

Now that the genome in known, Matsui already has plans to use it for additional studies. “In addition to rubber quantity, we want to improve its quality by modifying rubber-synthesis pathways and developing synthetic biological production of rubber in microorganisms or green algae.” 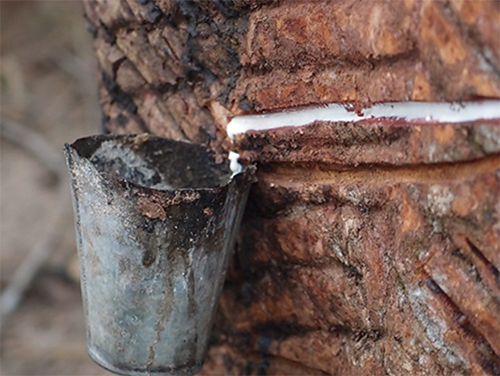 Rubber being tapped from a rubber tree 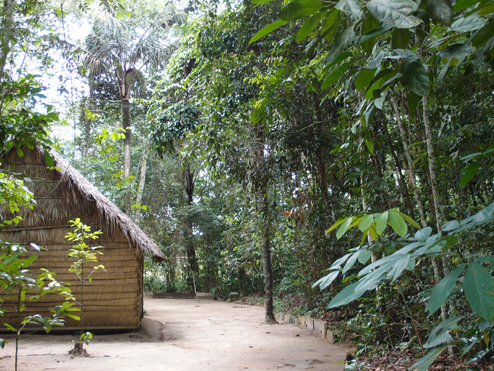