Locating social memories in the brain

Research at the RIKEN-MIT Center for Neural Circuit Genetics has identified where social memories are located in the brain. Published in the journal Science, the study shows that memories of social encounters are stored in a specific brain circuit that includes the ventral hippocampus, and that they remain in the brain even after mice can no longer retrieve them naturally.

Although remembering social interactions is essential for establishing relationships, whether these types of memories are stored separately from other memories was not clear until now. “Our data establish that biological evolution has generated a special hippocampal circuit dedicated to a type of memory critical for social interactions, as a special form of more general episodic memories,” says RIKEN Brain Science Institute and RIKEN-MIT Center Director Susumu Tonegawa. “This reflects how important social interactions are for the survival of social animals, including humans.”

Building on their previous work, the group took advantage of rodent natural tendencies to determine the site of social memories in mice. Because mice naturally express more interest in the unfamiliar, they were able to study social memory using a familiarity test. Normally, if a test mouse is placed in a cage with two other mice—one familiar and one unfamiliar—it will spend more time sniffing the new mouse. However, if memory of the familiar mouse is disrupted, it will sniff both mice for about the same amount of time.

With this setup, researchers used a combination of optogenetics and behavioral observation to test whether social memories are stored in hippocampal region CA1, a region already known to be involved in memory storage. The first discovery was that optogenetic inhibition of the CA1 ventral subregion, but not the dorsal subregion, caused mice to act as if they did not remember having met the familiar mouse.

A closer look at the ventral CA1 showed that neurons active during the initial social interaction were connected to three regions, but preference for the unfamiliar mouse was only disrupted when output to one of them—the nucleus accumbens—was inhibited. The same manipulation did not disrupt preference for unfamiliar objects, indicating that the circuit was specific for social memories.

Additional tests confirmed this ventral CA1-nucleus accumbens circuit as the site of social memory storage. Specifically, the same ventral CA1 neurons tagged during familiarization were reactivated by the presence of the familiar mouse, whereas optogenetically activating them caused the test mice to become less interested in new mice, acting as if the new mice were familiar.

Social memories do not seem to last as long as other memories, and through another set of experiments, researchers were able to determine what happens when mice naturally “forget” the familiar mouse. After 24 hours, mice normally act as if they have never met the familiar mouse. However, when neurons storing the memory were optogenetically reactivated during the social discrimination task more than 24 hours after the first meeting, mice suddenly lost interest in the familiar mouse, acting just as they did only 30 minutes after the initial meeting. This shows that the memories still existed, but that for some reason, the familiar mouse could no longer trigger their retrieval after a certain amount of time has passed.

Tonegawa and his group have already shown that memories in mice with Alzheimer’s disease symptoms also remain retrievable, and the potential for these new findings to fuel future research is high. Social neuroscience has been gaining recognition as an important research field, especially as it relates to abnormal social behavior. As Tonegawa notes, “our findings provide the fundamental brain mechanisms underlying the ability to recognize individuals. Because some brain disorders like autism involve impairment in social interactions, further research along this line can contribute to development of new therapies for these disorders.”

Lead author Teruhiro Okuyama is ready to take on this challenge. “The next step is to investigate the nature of the link between social memory and autism. Many autistic patients show impaired social memory and we know that some genes related to autism are expressed in the ventral CA1 region. We hope to use our advanced techniques to determine the function of those genes, and through manipulation, lessen their effects. This will give us practical insight for developing a new medical solution for autism.” 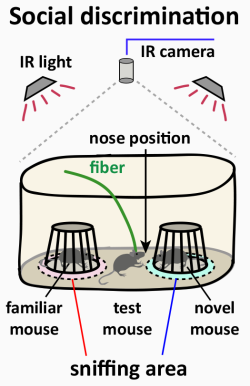 The test is freely investigates two mice, one which is familiar and one which is not. Naturally, mice are more interested in the new mouse, and spend more time sniffing around it. This behavior is used to assess social memory. When the familiar mouse is forgotten, the amount spent sniffing the two mice are about equal.