Like broccoli and ice cream on a toddler's plate, the brain also keeps nice and nasty information in separate places. Within the amygdala, an important memory center in the brain, pleasant experiences, tastes, and smells are confined to the back of the basolateral nucleus (BLA), while unpleasant ones are stored at the front. These anterior and posterior regions also interact in a push-pull manner, regulating behaviors tied to negative and positive stimuli, respectively. As reported on October 17 in Nature Neuroscience, these opposing neurons in the amygdala are not only physically separated but also genetically distinct.

While there is previous evidence for a positive/negative division in the brains of mice and fruit flies for smell and taste memories, the link from this split to positive and negative behaviors had not been established. Anterior and posterior BLA neurons are also capable of disrupting expected behaviors if they are turned on or off with optogenetic light stimulation, according to the new study from the RIKEN-MIT Center for Neural Circuit Genetics.

To identify the 'negative' and 'positive' neurons, researchers exposed male mice to either footshocks or the company of a female mouse. These specific experiences leave their mark in the amygdala in the form of higher expression levels of the gene c-Fos, a marker of neural activity. The activated neurons were genetically profiled, revealing two distinct genetic markers—Rpso2 for negative neurons and Ppp1r1b for positive neurons. Rspo2 was observed almost exclusively in the anterior BLA, while expression of the Ppp1r1b gene was concentrated in the posterior BLA. These spatially distinct positive and negative neurons differed in their size, shape, and electrical properties as well. The positive neurons were activated when mice were exposed to pleasant smells and water rewards, while negative neurons became active in response to pain and unpleasant smells.

Moreover, anterior and posterior neurons not only responded to the value of rewards, but were crucial for associated negative and positive behaviors, respectively. Mice were trained either to respond to footshocks by freezing in place (the negative behavior) or to perform a light-cued nose poke to receive water (the positive behavior). Using optogenetics, a method for manipulating genetically tagged cells with light, the researchers could weaken these behaviors, simply by targeting either the anterior or posterior BLA with precise bursts of light while the mice were trained.

Finally, the positive and negative neurons could even interfere with how well mice learned the associated positive and negative behaviors. The expected freezing behavior was reduced by light stimulation of positive neurons during the footshock training, and activation of negative neurons impaired the mice in the water reward task. These neurons could effectively drown out the positive or negative meaning of powerful external stimuli like water or shocks, and this is achieved through mutual inhibitory neural signaling between the anterior, or negative, and posterior, or positive BLA. The basolateral amygdala thus has an important role in associating negative and positive stimuli with appropriate behaviors. 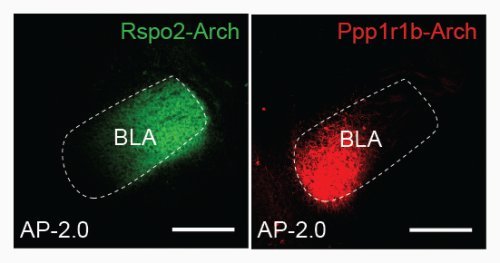 Neurons governing positive and negative memories are segregated in the basolateral nucleus (BLA) of the amygdala.