A group of researchers from RIKEN and Michigan State University have used the powerful K computer to show how molecules move within the extremely crowded interior of a bacterial cell.

In vitro studies—studies performed in test tubes—have given us great understanding of how molecules interact with one another. However, little is really known of how they interact in vivo—in actual cells—because due to the crowding, they can act based in ways that are difficult to model in test tubes. Approximately 70 percent of the cytosol is composed of water, and the remaining 30 percent is made up of macromolecules such as ribosomes, biomolecules such as proteins and DNA, metabolites such as ATP and amino acids, and ions.

For the study, published in eLife, the group modeled the inside of the smallest known bacteria—Mycoplasma genitalium—which has a length of approximately 400 nanometers—one nanometer being 1 billionth of a meter—and dynamically modeled approximately one trillion atoms within the cell, making this one of the largest molecular dynamic simulations performed to date. The simulation was carried out with GENESIS, a massively parallel molecular dynamics program developed at RIKEN. The calculations, which used 65,536 processing cores of the K computer, took several months to complete despite the power of the supercomputer.

The results of the study call into question the prevailing assumption that in the crowded cellular environment, interactions between molecules is primarily governed by a phenomenon known as the “volume exclusion effect,” meaning that the molecules monopolize a certain volume of the solvent—in this case water—in the solution around them, preventing other molecules from occupying that space. In contrast, the simulation found that other interactions—such as electrostatic between charged molecules—play a major role.

Isseki Yu of RIKEN iTHES, the first author of the study, says, “This work has shown us that there are major differences betweenin vitro conditions and the in vivo conditions in the cell. We have found evidence for interactions beyond the ‘volume exclusion effect’, including protein-protein interactions and electrostatic interactions with ions and metabolites. These need to be taken into effect when interpreting in vitro studies.”

According to Yuji Sugita, one of the leaders of the research team, who has laboratories in iTHES as well as the RIKEN Quantitative Biology Center and RIKEN Advanced Institute for Computational Science, “This research has brought us one step closer to the dream of simulating a complete cell at the molecular scale. The work will also contribute to drug development, as previous studies usually looked at interactions between proteins and a single candidate compound within water. Now, we will be able to also analyze the interactions between the candidate compound and other molecules within the crowded cellular environment.” Sugita continues, “One limitation of this study is that because of the enormous computing power required, we were only able to conduct short simulations. We believe it is still accurate, but hope to be able to perform this work on even more powerful future computers to reduce the statistical uncertainties and incorporate other interactions into the simulation such as genomic DNA and cytoskeletal elements.”

Michael Feig the leader of the project at Michigan State University, who is also affiliated with RIKEN’s Quantitative Biology Center, says, “This work is large step forward towards the modeling of an entire cell in atomistic detail which will ultimately allow us to connect what we know at the molecular level with biological function at the cellular level.” 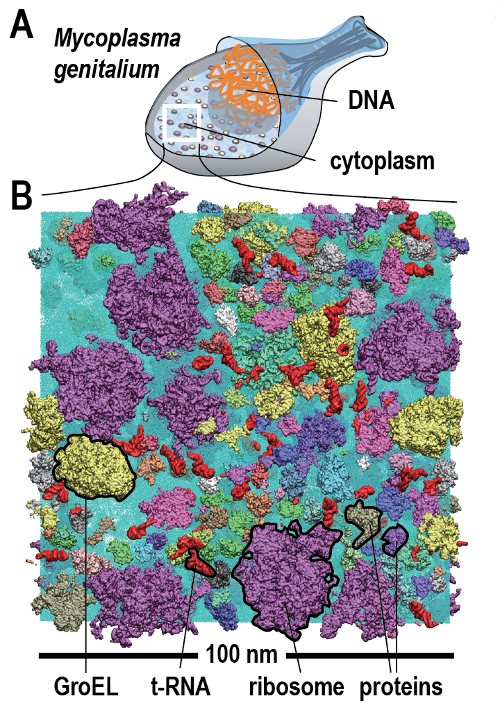 Schematic illustration of Mycoplasma genitalium (A) and a highlight of the simulated area (B), showing proteins, tRNA,GroEL, and ribosomes 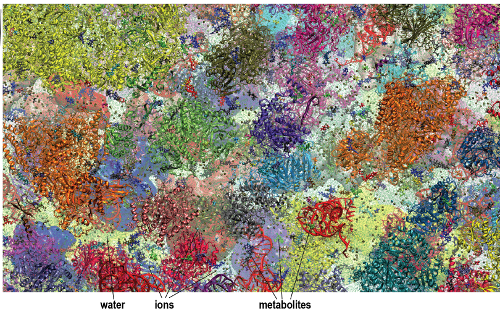