Schizophrenic stem cells do not differentiate properly into neurons

Researchers at the RIKEN Brain Science Institute have used human-induced pluripotent stem cells (hiPSCs) to identify a characteristic of abnormal brain development in schizophrenia. Published in Translational Psychiatry, the study shows how deletion of a specific gene known to be associated with schizophrenia leads to abnormal differentiation of neurons and an imbalance between the number of neurons and astrocytes in the brain.

While many genetic factors contribute to schizophrenia, small deletions of a region on chromosome 22 are thought to pose a particular risk because several genes at that location are involved in the development and function of neurons in the brain. To investigate exactly how brain development is altered in schizophrenia by genetic deletions in this region, the team led by Takeo Yoshikawa took advantage of modern stem-cell technology. The researchers produced hiPSCs from people without schizophrenia and from patients with schizophrenia who had this deletion, and compared how the different hiPSCs developed into neurons.

Explains Yoshikawa, “When we analyzed the hiPSCs, we found that patient-derived cells differentiated into fewer neurons and greater numbers of astrocytes. We then went further to determine the molecular mechanism underlying these changes in neurogenic and gliogenic competences.

When studying neuron differentiation from stem cells, scientists often generate neurospheres—clusters of cells in culture that contain neural stem cells and progenitor cells. The first thing the team noticed was that neurospheres from the patient-derived hiPSCs were on average 30% smaller than normal.

Since the cells in neurospheres can become neurons or glia—another type of brain cell—the team also looked at the proportions of neurons and glia that developed from the different groups of hiPSCs. They found that patient-derived neurospheres differentiated into 10% fewer neurons and about 13% more astrocytes—a type of glial cell—than normal.

The researchers then focused their investigation on the gene DGCR8 because it is located within the special region on chromosome 22, and when deleted in mice, also leads to smaller neurospheres. After confirming that DGCR8 expression was less in patient-derived neurospheres than in the controls, they showed that its deletion was associated with greater expression of the protein p38α, which is known to influence neural/glial competence of stem cells. Inhibition of p38α activity through inhibition of the protein MAPK14 increased the numbers of neurons that developed from patient-derived neurospheres and decreased the numbers of astrocytes.

“We ameliorated the lower neurogenic-to-glicogenic competence using a MAPK14 inhibitor”, notes Yoshikawa. “These results suggest that MAPK14 inhibitors might be an effective therapy if we could determine the appropriate time for administration, perhaps the early prodromal phase of schizophrenia.”

However, Yoshikawa cautions that the molecular mechanisms discovered here may not apply to all cases of schizophrenia. “Our iPS cells from schizophrenia patients are perhaps a special case, because they included the genomic deletion from chromosome 22, which, through MAPK14, led to the imbalance in neuron/astrocyte development. However, there are likely other ways for the same type of imbalance to form in more general cases of schizophrenia.” 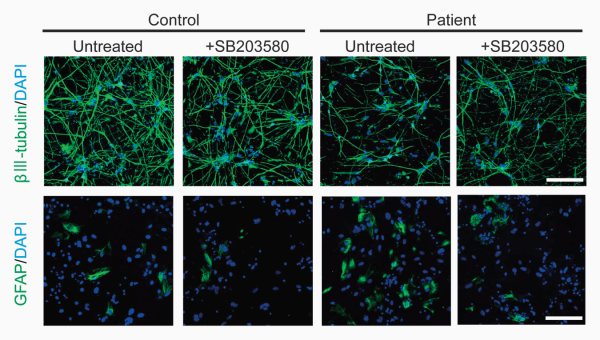