A team led by researchers at the RIKEN Biofunctional Synthetic Chemistry Laboratory in Japan has developed a way to engineer glycan complexes—clusters of sugar chains attached to proteins or lipids—in a way that allows the molecules to be transported preferentially to specific organs of the body, depending on the sugar chains contained in the cluster. According to Katsunori Tanaka, the leader of the team, this work, which was published in Advanced Science, could lead to the development of glycocluster-based diagnostic tools with better selectivity and precision than current tracers based on peptides and antibodies.

Chains of sugar molecules—called glycans—are found on the surfaces of cells, where they play important roles in controlling cell-to-cell communications and the recognition of foreign pathogens. It has long been known that these glycans form heterogenous clusters of different sugars, and that they form patterns that allow them to fit with certain proteins. However, researchers did not understand whether these pattern variations were simply random or played a purpose, influencing the movement of proteins and cells through the body.

To investigate this, the researchers used a method they developed, the RIKEN click method, to selectively attach two different glycans to a common protein—albumin—in specific patterns, where the sugars were ordered randomly or in a specific sequence. They then injected the resulting molecules, called heterogeneous glycoclusters, into mice. Following the administration, they used noninvasive imaging techniques to determine where in the body the conjugates traveled and how they were excreted. They then compared the results of their studies with these well-engineered glycans to homogenous glycoclusters—which only contain one type of glycan. They found that the heterogeneous glycoclusters exhibited special properties entirely different from homogeneous ones, such as being rapidly transported from the gallbladder to the intestine for excretion or accumulating selectively in the liver.

According to Tanaka, “This work shows that the heterogeneity of clusters does indeed play an important role in creating strong and selective binding in vivo. In the same way that burrs—and Velcro, which was developed based on the idea—attach powerfully even though each individual bond is weak, biological molecules often attach together using weak covalent bonds that together form a strong connection. In addition, using multiple glycan molecules—or in other words, heterogeneity—allows us to promote selective interactions with target molecules through pattern recognition. Hence, precisely controlling the configuration of the glycans may allow us to design new glycoconjugates that can be used to target certain tumors, for example.”

The work was done by the RIKEN Biofunctional Synthetic Chemistry Laboratory in collaboration with researchers at Kazan Federal University in Russia and the RIKEN Center for Life Science Technologies in Japan. 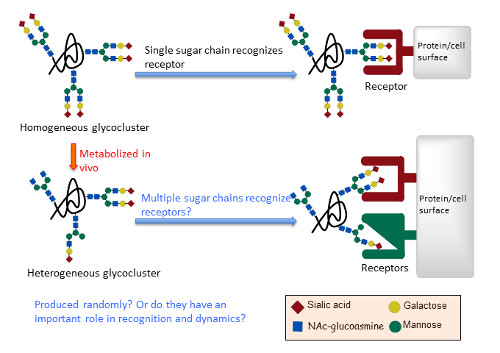 Schematic of the experiments 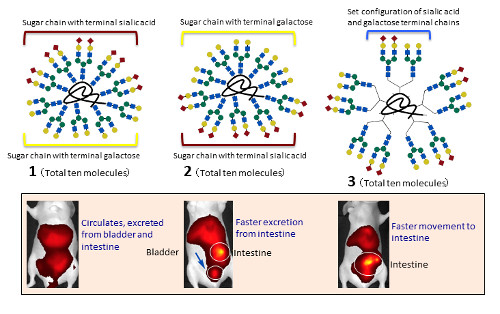 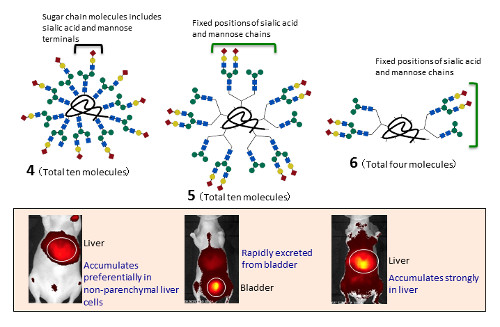