One of the deepest mysteries of physics today is why we seem to live in a world composed only of matter, while the Big Bang should have created equal amounts of matter and antimatter. Around the world, scientists including Stefan Ulmer’s team from RIKEN are designing and carrying out high-precision measurements to try to discover fundamental dissimilarities between matter and antimatter that could lead to the discrepancy.

In work published in Nature Communications, Ulmer’s team has found, using a sophisticated technique that involves trapping individual particles in a magnetic device, that the magnetic moment of the antiproton is extremely close to that of the proton, with six-fold higher accuracy than before.

To perform the experiments, they took antiprotons generated by CERN’s Antiproton Decelerator and placed them into a powerful magnetic device—called a Penning trap—where they could be stored for periods of more than a year. When doing the measurements—at times carefully chosen to fall during night shifts or on weekends to minimize magnetic interference—they took individual antiprotons from the containment trap and moved them into another trap, where they were cooled to practically absolute zero and placed into a powerful and complex magnetic field, allowing the group to measure the magnetic moment.

Based on six measurements done using this method, the group found that the moment (g-factor) of the antiproton is 2.7928465(23), while that of the proton was previously found to be 2.792847350(9)—with the number in parentheses indicating the amount of uncertainty in the final digits. This puts the two measurements—which are both absolute, rather than relative ones—to within 0.8 parts per million of one another.

According to Ulmer, “We see a deep contradiction between the standard model of particle physics, under which the proton and antiproton are identical mirror images of one another, and the fact that on cosmological scales, there is an enormous gap between the amount of matter and antimatter in the universe. Our experiment has shown, based on a measurement six times more precise than any done before, that the standard model holds up, and that there seems in fact to be no difference in the proton/antiproton magnetic moments at the achieved measurement uncertainty. We did not find any evidence for CPT violation.”

In future experiments the team plans to target the application of an even more sophisticated double Penning trap technique. With this method 1000-fold improved measurements are possible. The group has applied this technique already to measure the proton magnetic moment and has the set of required methods at hand to conduct this measurement with the antiproton as well. “However, the implementation of this experimental scheme is technically very challenging and will require several iterations”, says Hiroki Nagahama, a PhD student in Ulmer’s group and first author of the just published study, “we are planning to conduct this measurement in one of the next antiproton runs.” 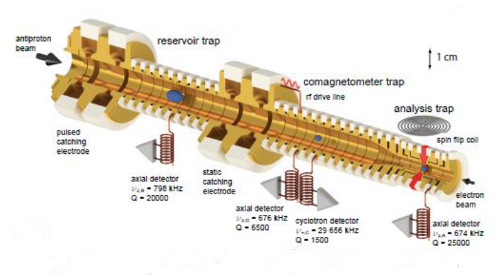 The trap used for the experiments