One of the big puzzles in astrophysics is how stars like the sun manage to form from collapsing molecular clouds in star-forming regions of the universe. The puzzle is known technically as the angular momentum problem in stellar formation. The problem essentially is that the gas in the star-forming cloud has some rotation, which gives each element of the gas an amount of angular momentum. As it collapses inward, eventually it reaches a state where the gravitational pull of the nascent star is balanced by the centrifugal force, so that it will no longer collapse inward of a certain radius unless it can shed some of the angular momentum. This point is known as the centrifugal barrier.

Now, using measurements taken by radio antennas, a group led by Nami Sakai of the RIKEN Star and Planet Formation Laboratory has found clues as to how the gas in the cloud can find its way to the surface of the forming star. To gain a better understanding of the process, Sakai and her group turned to the ALMA observatory, a network of 66 radio dishes located high in the Atacama Desert of northern Chile. The dishes are connected together in a carefully choreographed configuration so that they can provide images on radio emissions from protostellar regions around the sky.

The group chose to observe a protostar designated as L1527, located in a nearby star-forming region known as the Taurus Molecular Cloud. The protostar, located about 450 light years away, has a spinning protoplanetary disk, almost edge-on to our view, embedded in a large envelope of molecules and dust.

Previously, Sakai had discovered, from observations of molecules around the same protostar, that unlike the commonly held hypothesis, the transition from envelope to the inner disk—which later forms into planets—was not smooth but very complex. "As we looked at the observational data," says Sakai, "we realized that the region near the centrifugal barrier—where particles can no longer infall—is quite complex, and we realized that analyzing the movements in this transition zone could be crucial for understanding how the envelope collapses. Our observations showed that there is a broadening of the envelope at that place, indicating something like a ‘traffic jam’ in the region just outside the centrifugal barrier, where the gas heats up as the result of a shock wave. It became clear from the observations that a significant part of the angular momentum is lost by gas being cast in the vertical direction from the flattened protoplanetary disk that formed around the protostar."

This behavior accorded well with calculations the group had done using a purely ballistic model, where the particles behave like simple projectiles that do not need to be influenced by magnetic or other forces.

According to Sakai, “We plan to continue to use observations from the powerful ALMA array to further refine our understanding of the dynamics of stellar formation and fully explain how matter collapses onto the forming star. This work could also help us to better understand the evolution of our own solar system.”

The research was published in the Monthly Notices of the Royal Astronomical Society published by Oxford University Press. 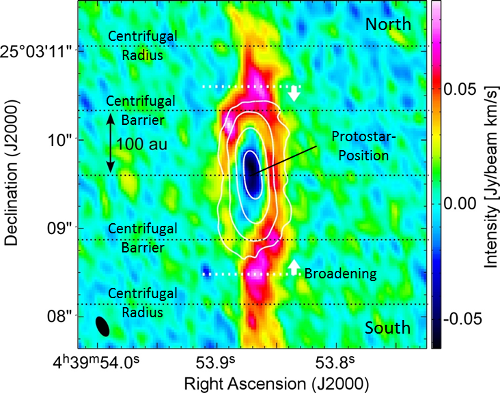 The infalling rotating envelope traced by CCH is broadened inward of the radius of about 150 au. 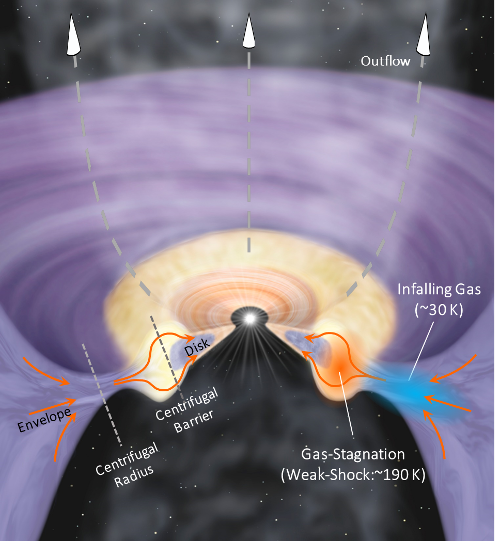