Combined observations from three spacecraft show that Jupiter’s brightest auroral features recorded to date are powered by both the volcanic moon Io and interaction with the solar wind.

At Earth, auroras are clearly driven by the solar wind that streams past the planet. But Jupiter's gigantic auroras—magnitudes more powerful than those on Earth—are believed to be mainly driven by factors within the Jovian system. Now, by combining observations from three spacecraft, scientists from an international collaboration led by a researcher at the RIKEN Nishina Center for Accelerator-Based Science have shown that the picture is complex—volcanoes on Io, one of Jupiter’s moons—and the most active volcanic body in the solar system—are responsible for powering some of Jupiter’s brightest auroral features through interactions with the shock wave caused by the arrival of the solar wind.

To perform the study, the group looked at data from three space-based sources—Japan's Hisaki satellite, an earth-orbiting extreme ultraviolet observatory that was launched into low-earth orbit in 2013, the Juno spacecraft, which entered into orbit around Jupiter in July 2016, and the Hubble Space Telescope, which took high-resolution far ultraviolet photos of Jupiter as Juno entered into orbit. By combining the data from the three spacecraft—including snapshots taken by Hisaki at ten-minute intervals for a period of more than six months, the team was able to more precisely map out the process through which the sulfur gas emerging from Io’s powerful volcanoes is stored in the area far from Jupiter, transiently accelerated, transferred toward Jupiter, and channeled into Jupiter’s polar region where it drives the aurora. These findings were detected during a “transient brightening” of Jupiter’s aurora—with the phenomenon moving from the polar region toward the equator—that was detected in May 2016, as Juno was approaching. The data showed that the energy from Io’s gas emission was somehow transferred toward Jupiter at a speed approaching 400 to 800 kilometers per second in the equatorial region of the space around Jupiter.

Previous observations had been made combining the data from Hisaki and the HST had concluded that the solar wind had little to do with the transient auroras. “What is special about our observations,” says lead author Tomoki Kimura, a Special Postdoctoral Researcher at RIKEN, “is that we were able to time the observations with the arrival of the Juno spacecraft into Jovian orbit. It turns out that Juno detected a shock wave originating from the solar wind, and this led us to infer that the solar wind was, along with Io, playing a role in the process by driving the energy toward Jupiter.”

In the past, it was generally considered that the magnetic field of a rotating astronomical body is powerful enough to completely dominate azimuthal movements of energy and mass near it, but the team’s findings challenge this assumption, as the energy seems to move from the area far from Jupiter toward Jupiter.. Moreover, this process seems to hold for other rotating bodies such as neutron stars.

Looking to the future, Kimura continues, “The Jovian system is known to contain several icy moons, namely Europa and Ganymede, which may potentially have extraterrestrial life in their underground oceans of liquid water, and the energy driven from the far area toward Jupiter could provide support for chemical processes on the icy surface of the moons. In the past we did not know how the energy was accelerated to such tremendous velocities, but now, thanks to these findings, we have a better idea. Now that Juno is in orbit around Jupiter, we will continue to receive new observational data that will help us pin down how the energy is transferred, again allowing us to gain insights in our search for life in those icy worlds.” 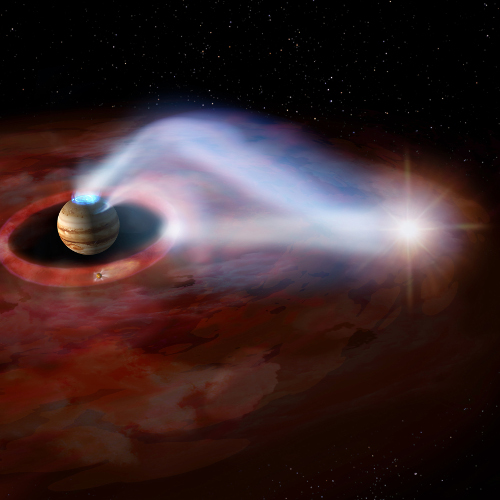 Schematic of the formation of an aurora at Jupiter. (C) JAXA