People organize memories in photo albums, journals or calendars, but how does the brain first put events in order? Though a great deal of work has been done on how the brain encodes memory for locations, leading to the discovery of 'place cells' in the hippocampus, we still have relatively little understanding of how personally experienced, or episodic, memories are represented by neurons. Now, researchers at Japan's RIKEN Brain Science Institute have found that the hippocampus can generalize, putting not just places but also events into sequence by changing the neural code in the rat brain. These 'event cells' discovered by the researchers may be a bridge linking information about the world with subsequent decision-making.

Neurons have two main ways they can signal to each other: by changing the timing or the frequency of their firing. In this study, Shigeyoshi Fujisawa and colleagues looked at how these two parameters changed while rats did a decision-making task based on certain combinations of smells and sounds. Using non-spatial stimuli presented in sequence was crucial to demonstrating that cells in the hippocampus also represent events, not just places. The study was published in the journal Neuron on June 8.

The research team recorded the combined activity of a large number of neurons in central hippocampal area CA1 while rats were engaged in choosing different sound-odor combinations to get a water reward. Many cells displayed elevated activity in response to one or both stimuli—often with a strong preference for one odor or sound versus the other—and retained this activation through the 'decision' phase, indicating that the inputs were being integrated by the brain and retained in a specific order to facilitate a subsequent choice.

The hippocampus is known to have a 'refresh rate' of around 8 Hz—the theta cycle— which guides how often neurons update their activity, a phenomenon called theta-cycle phase precession. The researchers were particularly interested in how this cyclic organization of information is modified by inputs, like a smell event followed by a sound event followed by a decision. Among the neurons that were responsive to smells, the theta phase precession occurred only for 'preferred' odors, followed by a locking of their activity to the theta cycle. This occurred for about 90 per cent of smell-sensitive cells, and was true for an equally high proportion of choice-sensitive cells.

On a more global scale, assemblies of hippocampal neurons can also form theta sequences, coordinated sequential activation patterns representing past, present and future locations during animal navigation. The authors investigated whether theta sequences were also formed by this cue-combination task. Such sequences were indeed present, and it was possible to 'decode' whether neural spikes at different phases of the theta cycle represented real-time inputs—the moments when the smell or sound event happened—or future periods—the decision-making moment. "Spikes that were locked to different phases of the cycle could even tell us if the rat had made a correct, rewarded choice or chosen the wrong cue combination," said Fujisawa.

Finally, the conditions of the experiment were reversed: the previously rewarding sound-odor combination became incorrect and vice-versa. Rats learned the new relationship after a few days, and their brain cell activity adapted too, exhibiting the phase precession and locking observed before the switch. "This neural reorganization reflects the sequence of the events and can be flexibly remapped," commented Fujisawa. "Cells that encode specific cues, combinations or choices can collectively represent an entire sequence of events when they become temporally organized with the hippocampal theta phase." The researchers surmise that the function of the hippocampus is to organize networks of relational elements, whether these are locations or events, as a mechanism underlying both episodic and spatial memory. 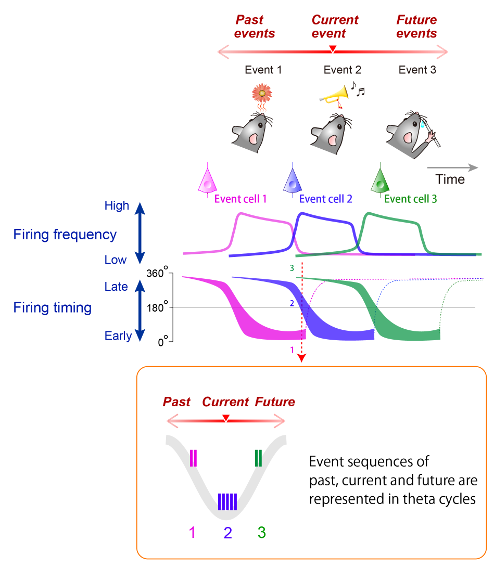 Event sequences of past (for example, smell), current (sound), and future (decision) are represented in theta cycles in the hippocampus of the rat brain.