Using a powerful technique known as “3D nowcasting,” an international team including scientists from the RIKEN Advanced Institute for Computational Science (AICS) has begun to provide, on an experimental basis, forecasts that predict the likelihood of precipitation in a given location ten minutes in advance. The group will use the system to determine if the experimental forecasts, based on data that is updated every 30 seconds, could be used to prevent damage from torrential rains. The work, conducted by a team including researchers from AICS as well as the National Institute of Information and Communications Technology (NICT), Tokyo Metropolitan University, and Osaka University, uses a combination of phased-array radar and computer algorithms that make predictions based on data from the radars.

Today, nowcasting—a term that refers to short-term weather forecasts made in real-time—is generally done using parabolic radar antennas, which take five to ten minutes to scan about 15 layers of the entire sky. Typically, it is done by looking at a single layer of the sky, detecting the rain there, and then extrapolating from weather conditions where the rain will be falling at a later time. However, though nowcasting requires much less computing power than weather simulations, it is not able to accurately predict rainfall from rapidly developing thunderclouds, where there are rapid vertical movements in the rain patterns.

Recently, however, a novel type of system, called a phased-array radar, was installed on the Suita Campus of Osaka University. The radar can be targeted very quickly—it can scan the entire sky in ten to thirty seconds, looking at approximately 100 angles with a range of 60 kilometers. The radar can be precisely targeted by manipulating the beams emitted by a number of devices, allowing a flat radar to scan the whole sky very rapidly.

In an effort to improve the forecasting capability of the radar, the group developed an algorithm that takes the enormous amount of observational data from the radar, updated every 30 seconds, and makes rapid forecasts based on the 3D rain data. This allows the extremely frequent and accurate forecasts to be made. The forecasts, which cover the Kansai (Osaka, Kyoto and Kobe) area of Japan, are available online at the Data Assimilation Team's website.

The group has also developed a forecasting model based on phased-array radar data using the powerful K computer, and though it cannot be currently implemented due to the need for massive computational power, the group plans to continue that work with the hope that it may eventually be implemented on future computers, allowing much more accurate forecasts of torrential rain. According to Takemasa Miyoshi, who leads the project at RIKEN AICS, “torrential rains can have tragic consequences, as they lead to flash floods or dangerous landslides in a matter of minutes. We hope that being able to forecast them, even ten minutes in advance, will help us to minimize the damage they can cause. There are still many issues to tackle, such as how to make this information available to those who need it in a timely and effective way, and we plan to continue our work to make this system a reality.” As part of the effort to make the system practical, the researchers are collaborating with an app designer that offers weather forecasting apps to smartphone users. They also look forward to collaborating with other phased-array radar facilities to provide forecasts for a more widespread area. 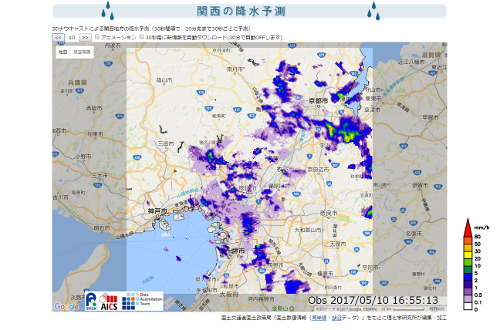 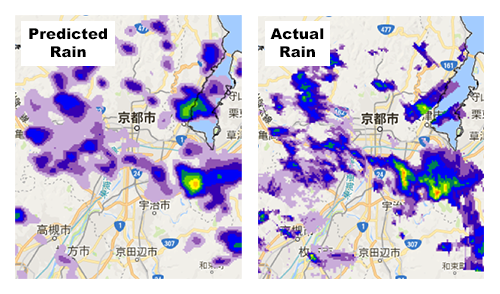