Researchers at the RIKEN Brain Science Institute in Japan have discovered a process through which changes in nutrition during early mouse pregnancy lead to offspring that develop schizophrenic-like symptoms as adults. Published in Translational Psychiatry, the study shows how deprivation of two polyunsaturated fatty acids during early gestation can have long lasting effects on offspring through specific epigenetic changes in gene expression.

Harmful conditions during pregnancy are known to affect the health of offspring, even resulting in adult-onset diseases. This concept—the Development Origin of Health and Disease (DOHaD)—can explain why rates of schizophrenia have been observed to double after famines. In order to develop effective treatments for schizophrenia, Takeo Yoshikawa and his team at RIKEN are researching exactly how malnutrition during early development changes the brain.

First author Motoko Maekawa notes that, “our work is the first in the field of psychiatry to identify a molecular cascade that links nutritional environment to disease risk in the context of the DOHaD paradigm.”

The first step to figuring out the “how”, was to determine the most likely nutrient whose deficiency is related to schizophrenia. Among several candidates that have been linked to schizophrenia, the team chose to study two specific polyunsaturated fatty acids—the omega-3 fatty acid DHA and the omega-6 fatty acid AA—because they are abundant in the brain and are known to be related to brain development. The team tested their theory by depriving pregnant mice of DHA and AA and testing whether their adult offspring shared characteristics exhibited by people with schizophrenia.

People in the early stages of schizophrenia have several common symptoms, including low levels of motivation, depression, impaired memory, and abnormal brain function in the prefrontal cortex. The adult mice whose mothers were deprived of DHA and AA showed similar symptoms.

As dysfunction in the prefrontal cortex is a hallmark of schizophrenia, the team next looked at how DHA/AA deprivation affects gene expression in that part of the brain. Among the hundreds of affected genes, they found a group of genes downregulated in people with schizophrenia that were also downregulated in the affected mice. These genes are related to oligodendrocytes, cells in the brain that surround neurons and help the transmission of signals in the brain. Additionally, expression of genes affecting the GABA neurotransmitter system were altered in ways that mimicked findings from the postmortem brains of people with schizophrenia.

Gene expression can be controlled by a certain class of proteins called nuclear receptors that attach to DNA and initiate the transcription process that builds proteins from the DNA code. When the team conducted further analysis of the fatty-acid deprived mice, they found several nuclear receptor genes related to fatty acids had been downregulated. It turns out that the abnormal expression of oligodendrocyte-related genes could be traced directly back to the low expression of these nuclear receptors, which in turn could be traced back to higher levels of DNA methylation, a common way to regulate gene expression. In this way, the altered diet succeeded in creating long-lasting changes in gene expression.

Once they knew which nuclear receptor genes were downregulated, the team could think about how to reverse the process. When they gave mice a drug that acts on RXR nuclear receptors, they found that oligodendrocyte- and GABA-related genes were upregulated, and that some of the abnormal motor behavior was reduced. “This was evidence that drugs acting on nuclear receptors can be a new therapy for schizophrenia,” says Maekawa. 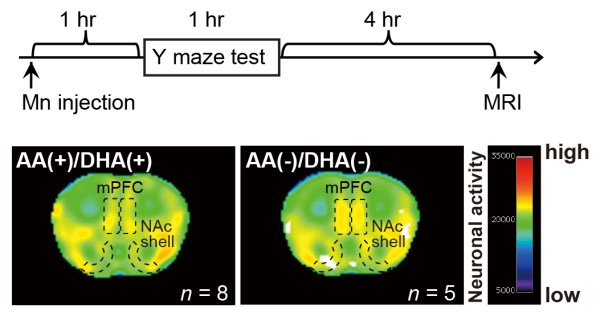 Upper panel: time schedule for the manganese (Mn)-enhanced magnetic resonance imaging (MRI) analysis. MRI signals were obtained at 4 h after the Y-maze test (at 6 h after intraperitoneal injection of MnCl2). Lower panel: the intensity of the Mn-enhanced MRI signal in the medial prefrontal cortexes (mPFC) and the nucleus accumbens (NAc) shell of an AA( − )/DHA( − ) mouse was substantially greater than that of an AA(+)/DHA(+) mouse. 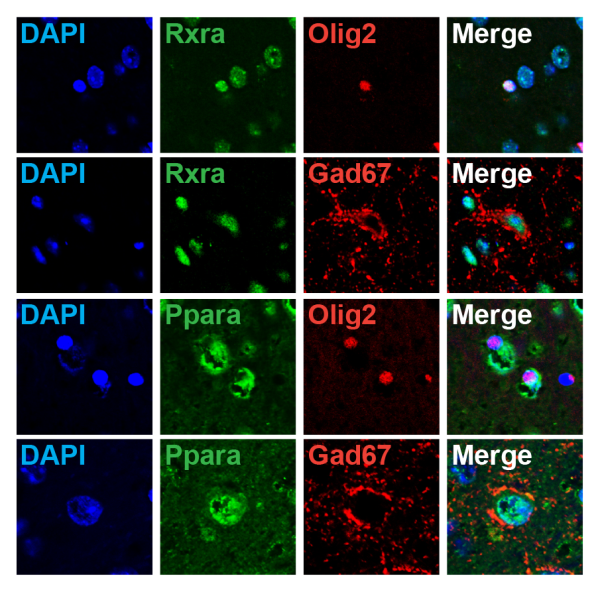 Immunohistological analyses. The key nuclear receptor genes Rxra and Ppara were expressed in the Olig2-positive and Gad67-positive cells.